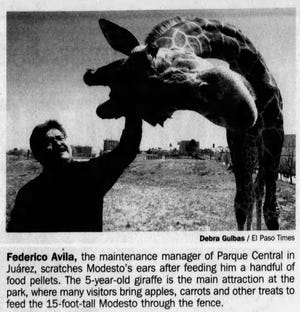 The 22-year-old male giraffe was the popular star of a one-animal “zoo” at Parque Central since his arrival in the Borderland in 2001.

The more than 15-foot-tall animal was believed to have died of heart trouble, though a necropsy will determine the cause of death.

The Juárez city government and the FC Juárez Bravos soccer team both tweeted condolences and thanks to a giraffe who was a local icon.

“You were and will always will be in the hearts of Juarenses,” the city tweeted.

A generation of Juárez children grew up visiting Modesto, hand-feeding him alfalfa-soy pellets from a gumball machine through a chain-link fence. Uniformed students from a nearby prep school would bring him apples, oranges and bananas at lunch time.

Modesto was purchased in Florida and brought to Juárez as part of a plan for the creation of a zoo that never materialized, according to El Paso Times archives. He became a solo attraction.

When a drug cartel was ravaged by Juárez a decade ago, Modesto remained standing tall as a wholesome oasis for families.

In 2011, Modesto was featured in a New York Times article titled “A Long-Necked Sign of Hope for a Frightened City.”

Modesto the giraffe was “more than just another oddity in this bizarre borderopolis of malls and murders. He has become a magnet for people trying to escape fear and the cooped-up life caused by violence,” the New York Times stated.

The African savannah animal was rugged enough to withstand the border’s desert climate but it was his loving attitude with visitors that ended him to fans.

A Facebook page dedicated to “Modesto, Jirafa de Juárez” chronicled his adventures. The page on Wednesday featured a photo of the Modesto with a halo and angel wings.

The fan page stated: “Adiós Juarenses!! I’m going to miss you so much, it’s my time to leave but always remember me with so much love. Thank you for all your love, I will never forget you. I love you !”

Stockton ATH Naseri Danielson has a few schools sticking out