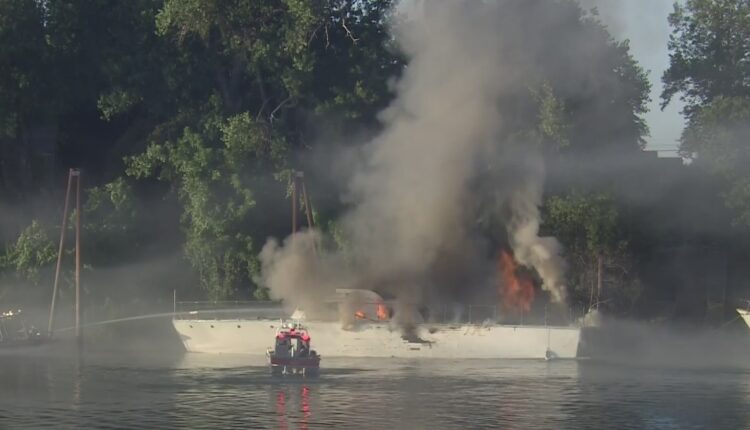 SACRAMENTO (CBS13) — Just days after a boat fire on the Sacramento River, the concern is growing that it could happen again.

There are dozens of other abandoned boats that are in danger of sinking on Sacramento waterways, and new efforts are underway to haul them away before they create a catastrophe.

Abandoned boats can be an environmental ticking time bomb.

“These vessels contain pollutants like oil and other hazmats like PCBs,” said Natasha Drane, a Sacramento County legislative officer.

And when they sink or catch fire, those toxins are released into the water and air.

“So if they’re just left in the water, they’re left polluting,” Drane said.

The 85-foot All-American is the latest example. A blaze on Tuesday caused major damage that took hours to extinguish. Now, an oil boom surrounds the vessel which is partially submerged on the Sacramento River near the I-80 bridge that connects West Sacramento and Natomas.

“That boat could potentially sit there for a really long time,” Drane said.

It’s one of more than 30 abandoned and run-down watercraft being tracked by Sacramento County, but the responsibility of who should haul them away is murky.

“No single federal, state or local agency has the authority or expertise to remove these vessels,” Drane said.

Finding the owners is often difficult. Recreational boats are required to register with the DMV, but larger watercraft don’t have to follow the same rules.

“Commercial vessels have no requirement to be registered, so sometimes we can’t even track who the owner is,” Drane said.

Now, Sacramento County officials are leading new efforts to prevent more problems with these abandoned boats. They’re sponsoring a bill currently being debated in the California Legislature that would create a new multi-agency council to track and prioritize the removal of the vessels. They’re also asking for $25 million in the state budget to fund the effort.

“We just need to make sure we’re getting rid of these boats,” Drane said.

It’s an idea supported by many people who regularly use the waterways.

“I think they should just put notices on them and within a certain amount of time they don’t respond or claim it then get rid of the boat,” said local boater Darin DeVard.

MORE NEWS: Amazon Alexa Will Be Able To Mimic Deceased Loved Ones’ Voices

Sacramento officials estimate it could cost more than $6 million to clean up all the abandoned boats currently in the county.