No. 14 Volleyball Completes Undefeated Weekend with Sweeps of Kean and Stockton 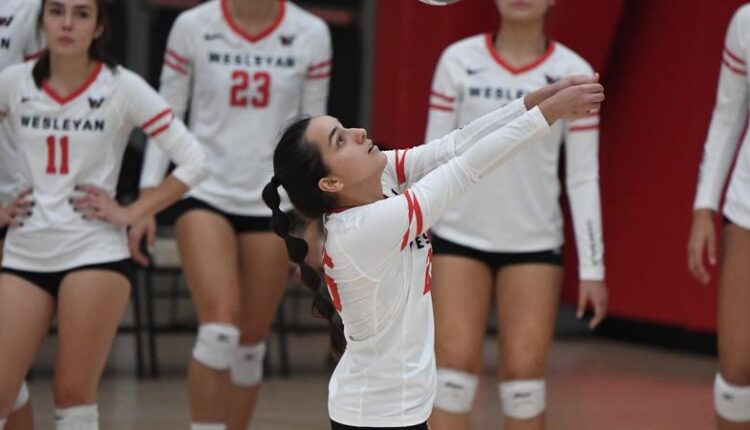 HOBOKEN, NJ – The No 14 ranked Wesleyan volleyball team completed a perfect weekend, sweeping both Kean and Stockton on Saturday as the Cardinals swept all three opponents at this weekend’s Stevens Invitational Tournament. Wesleyan moves to 19-2 overall on the season, tied with the 2019 season for the best start in program history.

The Cardinals beat Kean 25-23, 25-17, and 25-20 to open the day. Wesleyan hit at a .415 clip as a team, their second-highest single-match mark of the season. The Cardinals totaled 43 kills and nine errors on 82 attempts. Sophia Lindus ’26 had an outstanding performance, getting 15 kills and eight digs while hitting a career-high .520.

The Cardinals posted 34 digs throughout the match with Bianca Ortiz ’24 digging 10 and Grace Bell ’23 digging five. Maya Lopansri ’25 dug four balls and had 34 assists for a new season-high.

Like the Cardinals, Kean earned 42 kills, however their .218 attack efficiency did not match their opposition. Anne Beckemeyer led with 12 kills and three blocks followed by Taylor Micheaux with 10 kills. The Cougars dug 27 balls, had five blocks, and five aces.

In the first set, Wesleyan took an early lead 12-8. Then Kean went on a 4-point service run to tie the score up. The score was tight, until Wesleyan took off at the end of the set, winning it 25-23. The second set started off strong with a service run and two aces from Lindus. The Cardinals kept their lead with kills from Jorba, Ahearn, and Morton closing the set 25-17.

In the third, Wesleyan and Kean went point for point until 12-11, when the Cardinals started distancing themselves with kills form Ahearn and Lindus getting to a 5-point advantage. That proved enough as Wesleyan sealed the match victory with a 25-15 set win.

In their second match of the day and third in less than 24 hours, the Cardinals swept Stockton 25-21, 25-20, and 25-20. The Cardinals hit .229 scoring 38 kills, only one more than their opponents. They had a total of 12 blocks, eight of which were from Gonya which marked a new career-high for the sophomore. Gonya added four kills to her 8 blocks.

In the last set of the day, Stockton took the lead early, until Wesleyan pushed forward with a more aggressive offense with kills form Morton and Lindus bringing them back in. Wesleyan got up to a 18-12 lead seemingly ready to end the set and the day, but Stockton pushed back with a 6-2 run making this a much closer set. Grace Dennis ’23 subbed in and helped close the set, setting up Long and Ahearn for consecutive kills to close out the match 25-20.

Up next for the Cardinals is their last two regular season NESCAC matches against Middlebury on Friday and Hamilton on Saturday at home.