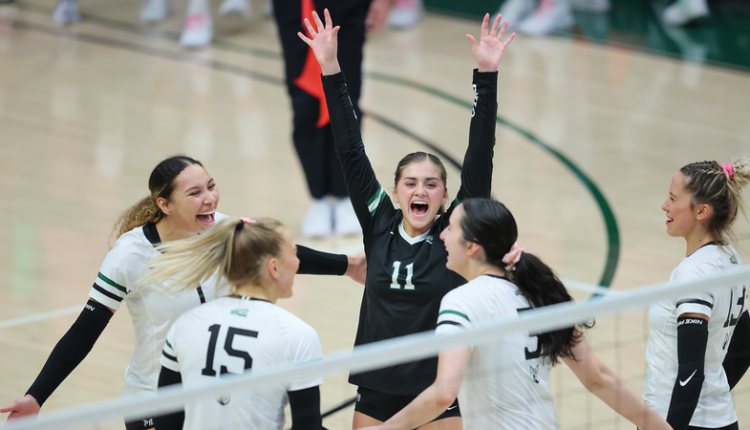 The back-to-back top-of-the-table wins mean the Vikings (13-7, 8-1 Big Sky) now lead Weber State by a match in the Big Sky standings, and hold a two-match lead over Northern Colorado and Sacramento State, which are now tied for third at 6-3 in conference play.

The similarities between this win and last week’s over Weber State stopped at the end result, however. Last Saturday, the Vikings outhit the Wildcats .353-to-.186, while recording their most kills in a three-set match (55) since the 2017 season. This Saturday, it turned into a defensive slugfest, as both the Vikings and Hornets (10-11, 6-3 Big Sky) hit below .200. The Vikings still outhit the Hornets .182-to-.174 – and out-killed them 53-to-47 – but their .182 hitting percentage marked just the second time out of their last 13 matches that the Vikings have hit below .200 .

“[Sacramento State] was striking it really well on the service line,” Portland State head coach Michael Seemann said of the defensive nature of the match. “For our serve-receive passers to not give up a lot of aces was huge. Untold story of that was that we put a lot of pressure on our pins. That’s a good defensive team [the Hornets]so if you put that much pressure on your pins, [the Hornets] are going to get some stops and some runs, for sure.”

The defensive theme shouldn’t have come as a surprise to anyone. Sacramento State came into the match leading the Big Sky with an opponent hitting percentage of just .145 within conference play. The Vikings topped that mark, but the Hornets still held the Vikings in check compared to the teams’ other recent matches.

A defensive win for the Vikings came at the net, where they finished essentially even with the Hornets. The Hornets still out-blocked the Vikings 6.0-to-5.0, but the Hornets came into the match averaging 2.6 blocks per set against Big Sky opponents, so limiting the Hornets to only six blocks certainly helped the Vikings.

Most importantly in a defensive slugfest, the big points become even bigger, and the Vikings consistently came through in those moments. That theme started early Saturday. A 5-0 Sacramento State run leveled the first set at 16-all, but the Vikings immediately responded with a 7-0 run of their own to take back control. Additionally, when the Hornets got back within two at 22-20 late in the second set, the Vikings immediately responded with a 3-0 run – the last two points coming on back-to-back kills from Makayla Lewis – to close out the set and take a 2-0 lead.

“That’s just resilience and also making sure that we’re only playing one point at a time,” Seemann said of how his team responded to the Hornets’ runs. “It’s always our goal to not put any more or less value on points. We’re a good team and I think we know that, so when we don’t make the job bigger than it has to be, then I think we remain confident as opposed to letting our emotions drive what we are doing.”

The fourth set was where the Hornets truly tested the Vikings’ resolve. A 3-0 run erased a 19-16 Viking lead, and the Hornets drew level again at 22-all after the Vikings edged out ahead at 22-20.

But at the same time, every time the Hornets came back to tie it, the Vikings would inevitably win the next point. That persistence was never greater than when Sacramento State erased two match points at 24-23 and 25-24. Both times, the Vikings immediately won the next point, giving them another chance to close it out. Parker Webb gave the Vikings their third match point with a kill that put them up 26-25, and setter Madison Friebel ended it this time as she pushed a ball to the deep corner after the Hornets won a joust at the net.

“We made plays at the end. It wasn’t pretty, but we made plays,” Seemann said of pulling out the fourth set. “I thought that we scrapped really well. A lot of the things that we invest in that you don’t always see when we beat teams, 3-0, is that defensive component. But if you rewatch some of those rallies at the end , it’s Ashleigh [Barto] with a one-knuckle, it’s those people really just grinding and making sure that we’re supporting our attackers.”

Libero Ellie Snook led the defense for the Vikings. Snook posted a match-high 26 digs, a total that also set a new four-set season high for the senior. Three other Vikings finished in double figures for digs, while the team out-dug the Hornets 70-to-67. Lewis followed Snook with 13 digs, while Friebel added 12 and Sophia Meyers chipped in 10.

Meyers also recorded a career-high five aces in the match, while the Vikings finished with 10 aces as a team – their second-highest total in a match this season.

Webb led all players with 17 kills Saturday, while hitting .214 and adding five digs and two blocks.

Ashleigh Barto led the Vikings at the net, as she recorded four blocks, three of which were on her own. Barto had a big solo block to snap the Hornets’ 5-0 run in the first set, a play that sparked the Vikings’ own 7-0 run late in the set that swung the early momentum their way.

A record crowd of 778 fans came out to witness the Vikings’ latest big-time win. The previous Viking Pavilion record was 635, set earlier this season when then-No. 19 Oregon played the Vikings on Aug. 28 in the final match of the Hotel Vance Rose City Showdown.

Those fans will get another chance to see their Vikings next weekend, as the Vikings remain home for matches against Northern Arizona and Northern Colorado. The Vikings open against Northern Arizona Thursday, Oct. 27, as the Lumberjacks come into Viking Pavilion for a match at 7 pm Win that, and the Vikings will play a third straight big-time Saturday match, this time against the third-place Bears at 2 pm on Oct. 29

And considering how the Vikings have handled their last two Saturday matches, Viking fans have to like their team’s chances.

Match Notes: The Vikings improved to 26-50 all time against the Hornets with Saturday’s win…The Vikings have won their last two against the Hornets, after they also beat them in five sets in the quarterfinals of last season’s Big Sky tournament…Webb, Lewis and Meyers all finished in double figures for kills for the fourth time in nine Big Sky matches.

No. 14 Volleyball Completes Undefeated Weekend with Sweeps of Kean and Stockton