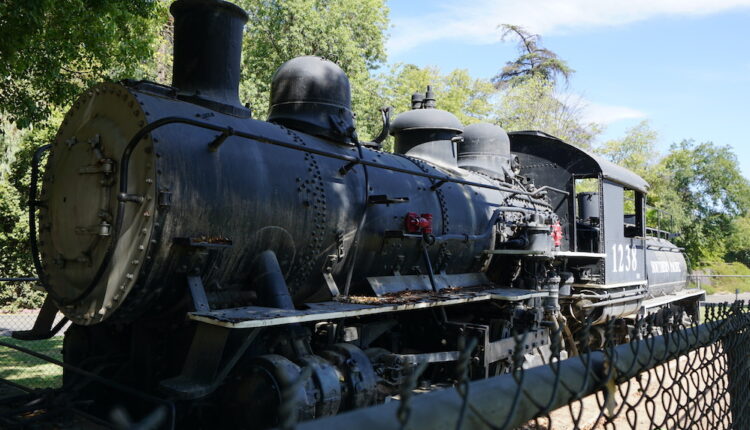 The Southern Pacific Engine 1238 was donated to the City of Fresno in 1956, and has been on display at Roeding Park. Photo by Edward Smith

Fresno City Council members have their sights trained on two transportation-related items this Thursday — one vintage and the other upcoming.

A measure from Councilmember Miguel Arias would donate the Southern Pacific Engine 1238 to the Kingsburg Train Depot. The train engine has been behind a chain-link fence at Roeding Park for decades and presents a liability, said Arias. People would climb on the train and could hurt themselves.

Donating the train to Kingsburg’s train museum would help maintain the artifact into the future. Arias said it’s not currently getting the care it deserves.

“In order to preserve history, you have to use it,” Arias said.

Arias liked the measure to the Fresno Water Tower as well as Armenian Town. The Water Tower is currently under renovation where it will house Frida Café, a coffee shop and bakery.

Developer Tom Richards of Penstar Group is currently working to turn Armenian Town into affordable housing, according to Arias.

Under the agreement, the Train Depot would take on all costs to transport the historic engine as well as preserve it.

Arias said the effort would keep the train in Fresno County, adding the donation to the museum is fitting as the train’s last conductor hailed from Kingsburg.

Southern Pacific Engine 1238 was retired and donated to Fresno in 1956.

The second bill is the next step in Mayor Jerry Dyer’s plan to unite Fresno State, the Tower District and Downtown Fresno by way of trolley.

The route would go from Fresno State through Tower and end in Downtown Fresno before turning around to continue the circuit.