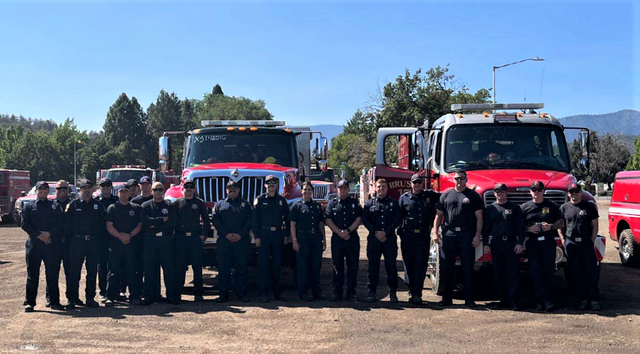 The following is a listing of some of the local calls for service involving the Modesto Fire Department, which staffs Stations 27, 28, 29 and 30 at Oakdale, Knights Ferry and Valley Home; and the Stanislaus Consolidated Fire Department, covering the Riverbank area.

Calls were logged during the time period of Tuesday, Aug. 9 through Monday, Aug. 15. Days not listed had no reports of significant incidents in this area.

1:09 pm – E28 and BC5 responded to Woodward Reservoir for a 1-year-old burn patient. The patient was transported by air ambulance to a burn center with burns to her face and hands.

11:32 pm – Stanislaus E26, Q22 Modesto E7, E9, E28, E27, BC5 and BC1 responded to the 3400 block of Stanislaus Street in Riverbank for a working residential structure fire. Crews arrived on scene and found an exterior fire that had spread into the attic of the front residence. Crews were able to quickly knock the exterior fire down and then worked on the fire in the attic, limiting spread in the attic. Crews worked on salvage and overhaul of the residence. FIU was on scene conducting an origin and cause investigation.

12:26 am – Engine 29, Engine 28, BC5, Oak Valley Ambulance, CHP, Sheriff’s Office, and Cal Star 12 responded to a vehicle accident at Sonora Road and Kennedy Road in Knights Ferry. Engine 29 located a solo ATV rider down and initiated Advanced Life Support on the patient. Engine 28 secured a landing a zone for the helicopter. Patient was flown to a local hospital. CHP and Stanislaus Sheriff are investigating the incident.

Crews returned home from the deployment from the fires in Northern California after two weeks of assisting.

5:42 pm – Stanislaus E26, Modesto SQ11 and BC5 responded to a possible drowning in the 2100 block of Leo Court in Riverbank. Crews arrived on scene and found the child out of the pool and breathing. Crews assisted with care while enroute to a local hospital.

Captain Bairos trained with BC5 on duties and responsibilities of BC5.

Staff meeting was held at Station 26.

Regular Board meeting was held at Station 26.

1:46 pm – Engine 26 was requested to assist Escalon fire with a vegetation fire on Santa Fe and Harrold. Thirty minutes later E27/W27 and BC2 were added to the response as well. E26 was eventually sent for station coverage, while W27 delivered one tank of water before being released.

7:31 pm – Modesto Engines 3, 5, 7, 27, SQ11, Stanislaus Engine 26, Truck 1, Truck 5, BC2, BC5, and FIU responded to the 4600 block of McHenry Avenue for a report of a commercial working structure fire . Upon arrival crews located a debris fire in the back parking lot of the business. Squad 11 and Engine 7 extinguished the fire, FIU is investigating.

10:07 am – E26 was dispatched to a vehicle fire (No address information provided). They arrived to find a cargo van in an orchard well involved. FIU is conducting the investigation. The van was later reported to have stolen.

BC5 and E28 participated in Battalion Chiefs training.

4:38 pm – E28, E26, Q22 and BC5 responded to a vehicle accident with pin-in. Upon arrival, units discovered a concrete pump truck on its side in a ditch along Highway 120 west of Oakdale. The occupant self-extricated and there were no injuries. E28 remained on scene for several hours while they worked on removing the truck from the ditch. CHP is investigating.