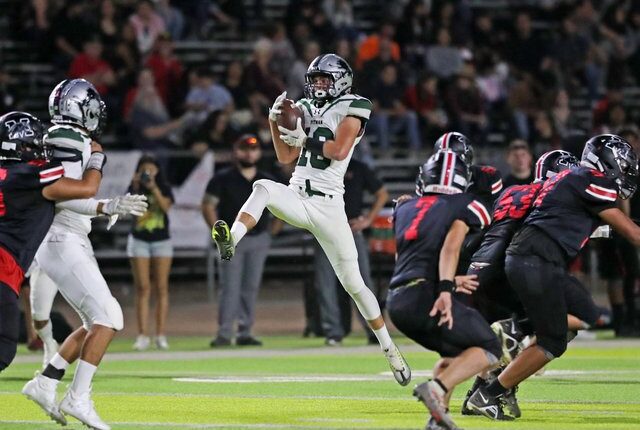 Entering Friday night’s Central California Athletic League game on a seven-game losing streak, Pitman High took out a season’s worth of frustration against Modesto in a 56-22 victory that was far more lopsided than even the final score indicated.

“That was fun,” said Pitman head coach Eric Reza, whose team improves to 2-7 overall and 1-3 in the CCAL. “There was a lot of pent-up aggression tonight and we came out and executed. Last week against Gregori, we saw glimpses of it. Tonight, we were able to put it all together.”

After the Pride took an early 7-0 lead on a Drew Walker-to-Dylan Freeman 60-yard strike, they extended their lead on a pair of Joey Stout touchdowns — one a 28-yard pass from Walker and the other a 75- yard run.

With the outcome seemingly assured, the only question that remained at that point was anybody whether could stop Stout.

The answer was no. Well, nobody wearing red and black, anyway.

Stout, who finished the game with 154 yards rushing on 11 carries and 85 yards receiving on three catches, had a 70-yard punt return nullified by a yellow flag just before halftime (the Pride eventually scored anyway) and a 76-yard kickoff return nullified to start the second half.

Stout also hauled in a 44-yard reception that appeared to go for a touchdown — he dove from about the 4-yard line and clipped the pylon — but he was ruled out of bounds at the 2 (Walker would later cap that drive with a keeper to make it 35-0 before the break).

The officials put a stop to Stout’s evening altogether with about 10 minutes in the third quarter when he was flagged for a second unsportsmanlike penalty within a span of 2 minutes. Two unsportsmanlike infractions merit an automatic ejection and results in the player being ineligible for the following week’s game — the final contest of Stout’s high school career. 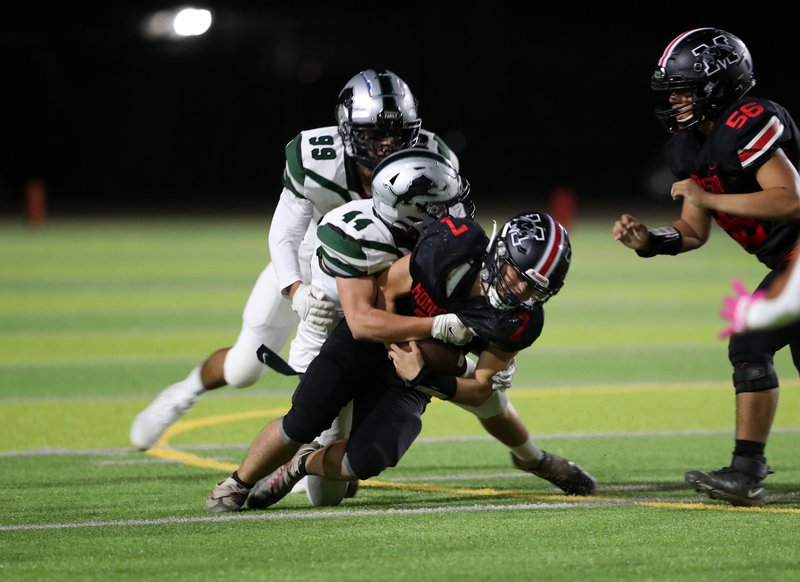 “We’re absolutely going to contest the ruling,” said Reza. “We don’t think it was fair.”

Pitman’s coaching staff believes that the first infraction was committed by another player and the referee reported an incorrect jersey number — Stout’s No. 24

“Our line really did a good job tonight,” said Walker. “They opened holes for our running backs, and gave me time to make throws.”

Pitman’s offensive line has not played two consecutive games this season with the same starting five, battling injuries, COVID and other calamities.

Freeman, in addition to his game-opening TD catch, turned in an interception on the Panthers’ next possession.

“This was my first game playing the ‘beast’ position,” said Freeman, describing what’s essentially an outside linebacker post. “I’m free to work and I just saw the quarterback’s eyes move to the right side. I was in the right spot at the right time.”

The Pride close out the 2022 season next week back at Chuck Hughes Stadium against league-leading Downey.

Road closures, what to expect