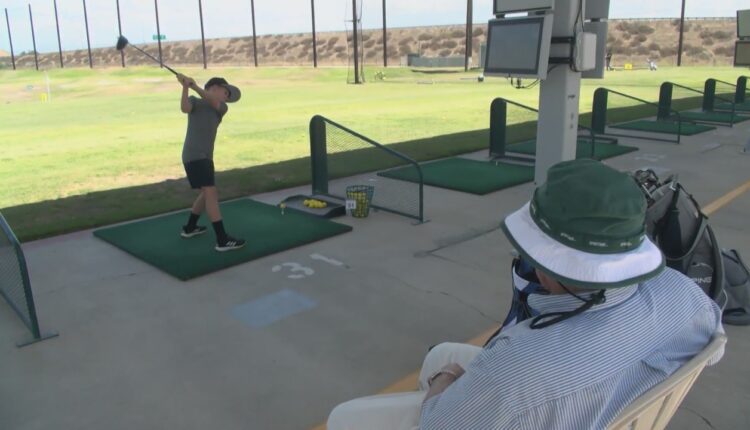 Fresno, Calif. (KGPE) – Sports anchor Scott Bemis, his son Cooper and his father-in-law Paul had a blast Thursday exploring the newest feature at the golf facility in Fresno.

“I would describe it as a virtual reality golf course that you can play, and actually feel like you’re playing it,” said Cooper.

Perhaps the coolest feature of the new Toptracer area, which features 15 covered bays and television monitors that track the ball flight, is the opportunity to virtually play some of the most famous golf courses in the world, like St. Andrews in Scotland and Pebble Beach on the Monterey Peninsula.

The Bemis family played the back nine at Pebble on Thursday, using an option that allowed them to play a three-man scramble.

There are a bunch of other courses you can play, and there are other options that allow you to hit towards targets or play different games.

There is even an animated, cartoon-like option for the kids.

“We just thought that it would add a whole new dynamic to golf,” said Valley Golf instructor Christina Torres. “There’s nothing else like this in the Valley.”

Another feature: you can download the Toptracer app on your phone and it will keep track of all your shots.

And it’s also a great group activity since up to four people can play at any time at one bay.

The bays can be reserved, and the staff at Valley Golf Center recommends making one, especially for the weekend nights, which have been quite busy.

How to know if your fireworks are legal in Sacramento