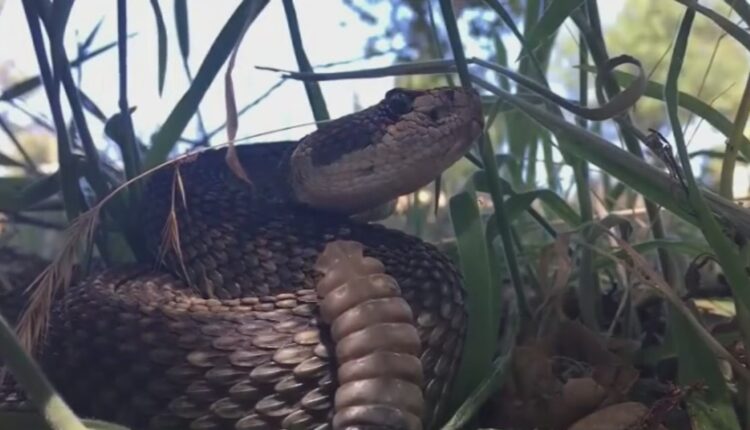 AUBURN (CBS13) — As people head outdoors this Memorial Day Weekend to hike, bike or enjoy nature, there’s a renewed warning about what might be lurking along the trails.

From backyards to bike paths, it’s the time of year more people are seeing rattlesnakes.

“The triple-digit temperature definitely brings the snakes out,” said Luis Fraser, the owner of Reptile Removal.

Fraser has been busy responding to multiple calls each day from people desperate to get rid of rattlers — like two that were found in the backyard of an Auburn home.

“They were both coiled up right underneath the sliding glass door,” Fraser said.

The Northern Pacific rattlesnake is native to the Central Valley and foothills region. Full-grown ones are about three feet long and have a triangular head and a rattle on their tail.

Fraser says this time of year, the baby snakes are now spreading out and looking for food.

“Usually, we come across them when they’re moving, so if we take an evening walk or a morning stroll, sometimes we might see them in the open,” he said.

READ MORE: ‘I Think It’s Time To Shut It Down’: Lodi Homeowners Fed Up With Massive House Parties

And if they’re hiding on people’s property, Fraser said they send in Peaches, the company’s snake sniffing dog.

“If we feel like it’s snakey, we’ll refer to her,” he said of Peaches. “She’ll literally be able to detect where snakes have been living.”

So what should people do if they see a rattlesnake?

“They’re very cool. Don’t throw anything at it, don’t disturb it, and you should be fine,” Fraser said.

But if you are bit, he says to act immediately.

“The number one thing is time,” Fraser said. “Make sure you don’t exert yourself and get to a hospital as fast as possible.”

And according to the Effie Yeaw Nature Center in Carmichael, there have been no reports of anyone being begged along the Lower American River Parkway for several years.