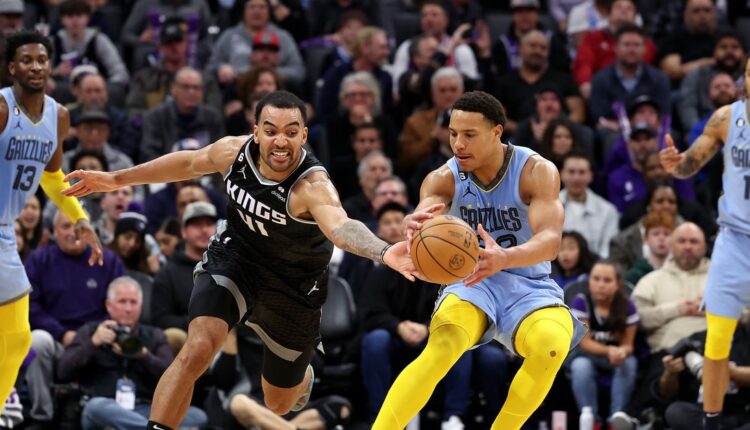 After losing the first two games of their road trip, the Memphis Grizzlies traveled to Sacramento looking to the right of the ship. They would have to do so without Ja Morant and Steven Adams, who were both banged up later in the game against the Phoenix Suns.

The Sacramento Kings started out hot, led by 15 1st quarter points from Harrison Barnes, and made their first 10 three-pointers of the game. They finished the quarter shooting 12-13 from three, tied for the most makes in a quarter. The Grizzlies were able to respond defensively in the 2nd but still trailed by five at halftime.

The Grizzlies came out strong in the 3rd quarter and took the lead after trailing by as much as 16, but the Kings quickly regained control of the game. The deficit was back in double figures heading into the 4th quarter behind some great plays from Trey Lyles as the Grizzlies lost 133-100.

Now for the degrees

Desmond Bane’s offense was one of the few bright spots in an otherwise tough game for the Grizzlies. He attacked the rim early and was able to get easy buckets in transition as well. He also made three of his four three-pointers and led the team with 21 points.

It’s good to see Bane playing at a high level after his injury. After a few tough games when he first returned, Bane has now scored 20+ in five of his last six games, but the Grizzlies are just 3-3 in that stretch. Bane seems to be back near 100%, but he will need a lot more help in the future.

Jaren Jackson Jr struggled early in the game, starting 2-8 from the floor but did pick up his offensive game as the game continued. Jackson scored 18 points but shot just 7-18 from the field, missing a lot of shots he has made consistently in the past. He was still the Grizzlies second-leading scorer and made 3-6 threes, but his slow start definitely contributed to the struggles for Memphis.

Defensively, Jaren could not have the same impact, primarily because of the overhelping on the perimeter, which led to a lot of wide-open looks outside. His streak of games of 2+ blocks came to an end at 17 games, a Grizzlies franchise record.

In a game where Trey Lyles scored 24 off the bench for Sacramento, the Grizzlies bench as a whole scored just 25 points. Depth is usually a strength for Memphis, but without Adams and Morant, it was clear that the back end of the rotation was struggling. John Konchar and David Roddy scored no points in a combined 28 minutes, while Santi Aldama and Ziaire Williams shot the ball poorly. Brandon Clarke played just 13 minutes because of foul trouble in a game where the Grizzlies could have used another body on the glass without Adams. Overall it was a lackluster performance as they were outscored 57-24 by the Kings’ bench.

Overhelping against a team like the Kings that is full of shooters and move the ball well is a recipe for disaster. The Grizzlies have struggled with defending the three-point line all season, but tonight was on a different level. They allowed an NBA record number of three-pointers in the first quarter and allowed 22 made threes on 56% shooting. The Grizzlies made ten less three-pointers than the Kings and lost by 33 points, meaning that the deep ball was the main difference in the game.

Another area where the Grizzlies struggled was on the boards without Steven Adams. The Grizzlies have been one of the best rebounding teams in the league all season, but tonight they were outrebounded by 21 and were unable to get their usual number of offensive boards. No one was able to step up and make a difference in Adams’s absence in this aspect of the game.

It was another rough night for the Grizzlies as they extend their losing streak to three games. They clearly missed Ja Morant and Steven Adams, but that’s not an excuse for the defense that was played tonight, especially on the perimeter. The Grizzlies will head back to Golden State on Wednesday as they continue to try and reignite the flame from their 11 game win streak.

As States Seek to Limit Abortions, Montana Wants to Redefine What Is Medically Necessary

Three Teens Stabbed After Fight Breaks Out In Fresno