Residents forced out after ‘intentionally set’ fire in Fresno 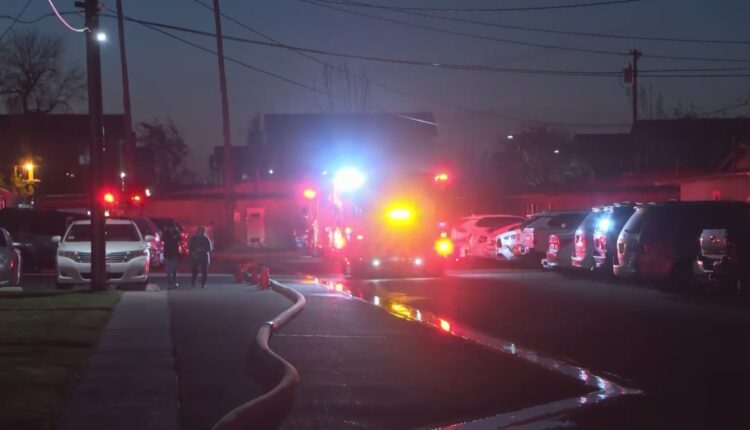 Fresno, Calif. (KSEE/KGPE) – Dozens of people at an apartment complex need to find a place to sleep Tuesday night after a fire breaks out inside a unit, on East Weldon ave and North Angus Street.

Helmet cam video from Fresno fire shows the moments they rush inside a burning apartment building to get residents to safety.

“This unit was part of a 6 pack apartment thankfully firefighters were able to put the fire out and keep it from spreading throughout the rest of the building,” said Jonathan Lopez with Fresno Fire.

The fire broke out around 5:30 o’clock Tuesday night.

Fire officials say smoke and flames were spewing out of a single-story apartment unit.

“Because of the high life safety hazard potential and the common attic, firefighters called for a 2nd alarm… we had 44 firefighters here on scene to extinguish this fire,” said Lopez.

We’re told the woman that lived inside the unit received first-degree burns to the face and was rushed to the hospital.

Other buildings nearby also had to be evacuated.

“Right now investigators are saying the cause is accidentally caused by a space heater,” added Lopez.

Fire crews also responded to a scene just after 2 o’clock in the area of ​​Tyler Avenue and Bond Street.

The helmet cam from this fire shows the moment firefighters scrambled into the burning building.

You can see heavy smoke and flames coming out of this two-story apartment.

Crews were able to safely make their way inside and stop the flames from spreading to other units. No one was hurt in this incident.

“Firefighters now believe that fire was intentionally set and it is being investigated as arson,” said Lopez.

Officials say 15 people were displaced tonight, the Red Cross is helping these families find a place to stay.