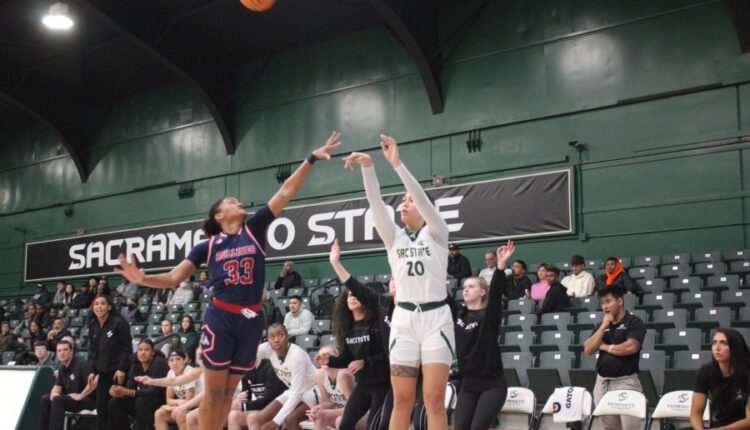 Sophomore guard Katie Peneueta shoots a three against Fresno State Dec. 3, 2022, at The Nest in a narrow 62-61 Hornet win. After dropping their season opener, Sac State has now won six in a row.

The Sacramento State women’s basketball team outlasted the Fresno State Bulldogs 62-61 at The Nest Saturday as a defensive stand in the final five seconds secured the Hornets their sixth win in a row.

Once again, the Hornets were locked in offensively from the very first whistle, scoring on their first two possessions to set the tone. Sac State has outscored opponents 252-187 in first halves this season.

The first quarter’s pace was so fast you’d think it was a track and field event as the Hornets totaled 27 points in the frame, including 11 from senior guard Kahlaijah Dean.

The Hornets had a true shooting percentage of 66.3% in the quarter.

The second quarter was less fruitful for Sac State, as Fresno outscored the Hornets 18-13.

Fortunately for Sac State, they were able to end the quarter on a 5-0 run thanks to a three by senior guard Kaylin Randhawa followed by a buzzer-beating layup by junior center Isnelle Natabou, giving the Hornets a double-digit lead heading into halftime.

The Bulldogs continued their momentum from the second quarter into the second half, demolishing the Hornets’ lead and eventually taking a lead of their own.

The Hornets’ offense became clunky and struggled with handling the ball against the press, an issue Sac State has been battling all season.

Redshirt freshman Benthe Versteeg scored six straight points for the Hornets towards the end of the third quarter to keep the game neck-and-neck.

To open the fourth, Natabou did the same — scoring a 6-0 personal run and eight straight for Sac State.

“[Natabou] is a really important part to our team,” Sac State head coach Mark Campbell said. “She’s going to be arguably the best post player in every game we play.”

Natabou finished with 16 points,11 rebounds and on 7-7 shooting as she didn’t miss a shot all game.

“I was happy, because it all leads to [the] same goal of winning,” Natabou said. “Our potential is limitless.” 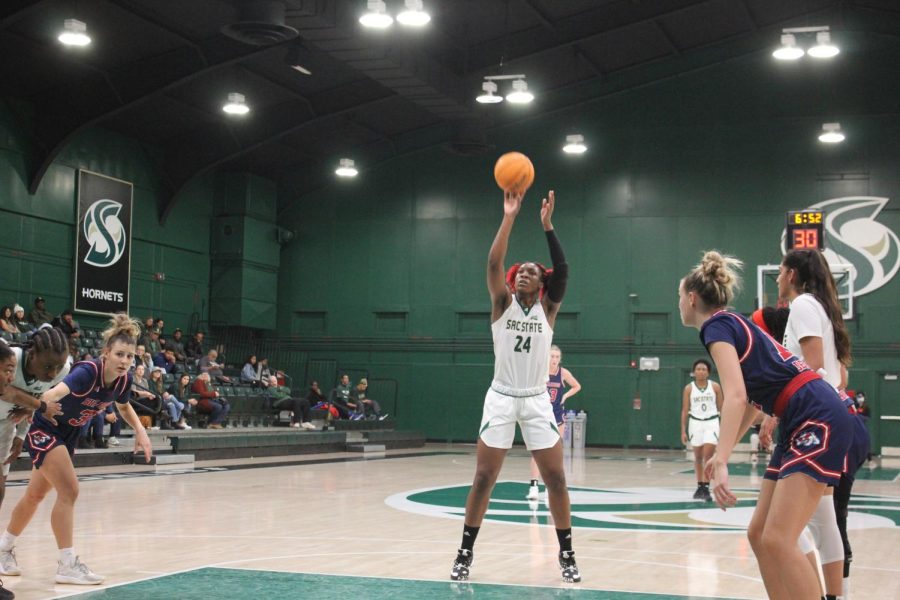 Junior center Isnelle Natabou shoots a free throw against Fresno State Dec. 3 , 2022, at The Nest in a 62-61 Hornet win. Natabou had 16 points while going 7-7 from the field and 2-2 from the free throw line and is averaging 15.9 points-per-game along with 11.1 rebounds-per-game.

The game devolved into a low-scoring dog fight in the fourth quarter — the Hornets outscored the Bulldogs 12-9 as the pace slowed in the final frame.

The Bulldogs had the ball and were down one point with 22.5 seconds remaining.

Senior guard Amaya West missed a jumper and both teams battled for the loose ball. It was called a jump ball and possession was rewarded to Fresno State.

“I think they called it pretty quick, but the refs gonna call what they’re gonna call,” Dean said.

Bulldogs got another try with just 5.5 seconds and once again Sac State did just enough.

Fresno State forward Amiee Book missed a jumper and Randhawa got the rebound as the final buzzer rang.

Although it wasn’t always the prettiest, or the best shooting game for the Hornets, Sac State was still able to win its’ six in a row, and sit at 6-1.

“We have to learn to be consistent throughout our games,” Dean said. “Don’t ever let up, stay composed and keep playing our game.”

The Hornet offense cooled in the second half, managing only 22 points in the half and shooting 39% while only hitting one three.

Sac State has had worse games turning the ball over, but 11 in the second half limited their chances on offense.

“It takes time to grow and gel and each one of these opportunities is a learning experience,” Campbell said. “Thank you, we won this one.”

The Hornets will go on the road to take on the San Diego State Aztecs on Wednesday and will have an early tip at 11:00 am The game is available for streaming here.

“Not going to lie, it was a little bit scary,” Natabou said. “Control is only within us; it’s okay.”