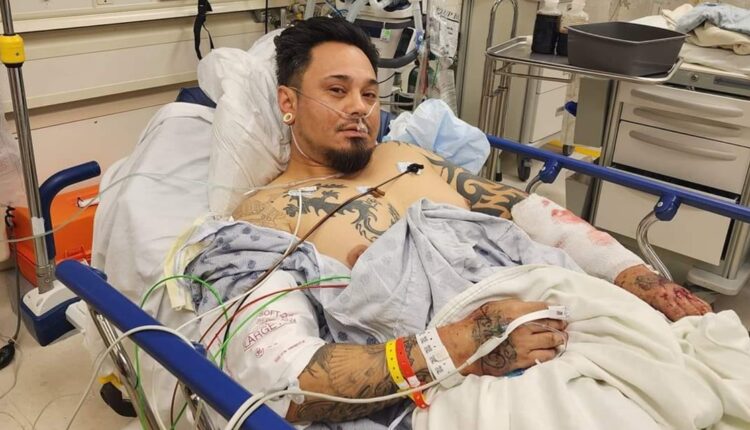 Barry Kunkel is in recovery after his trailer was flipped over near Chiles Road during Saturday’s high wind storm.

SACRAMENTO, Calif. — A Sacramento truck driver recalls “escaping death” after 70 mph winds abruptly flung him and his big rig trailer on its side, skirting across the asphalt during one of the worst winter storms of the year so far.

42-year-old Barry Kunkel took his normal route from Vacaville to Sacramento late Saturday night with a trailer full of cargo going eastbound on I-80, when a gust of strong wind swept his truck and trailer onto its side across the highway.

“I kind of had that fear that something bad was gonna happen that night,” said Kunkel. “I even told my loved ones that I was kind of scared to drive that night.”

Toward the beginning of his shift, Kunkel received multiple calls from his supervisor on his personal phone, letting him know that it was too dangerous to continue his route due to high winds and severe weather warnings.

Kunkel said he never answered his personal phone while driving, so the message wasn’t received until he was already loaded up with cargo and on his way back to Sacramento from his first stop in Vacaville.

However, as he drove the windy highway, he was well aware of the dangerous conditions and knew trouble could be up ahead.

“I slipped my hazards on, let all the other people on the road know that I’m going severely slow because the winds were picking up,” said Kunkel. “That’s when it abruptly hit me.”

According to Kunkel, the massive wind gust was abrupt and gave no prior signs it would do that kind of damage to his truck.

“When I finally did topple over, it just happened — instantaneously,” said Kunkel. “I mean, it was just one big, big swoop and bang and then I was grinding across the asphalt for a good, I’d say, seven, eight seconds.”

Following the accident, a number of good Samaritans stopped to help Kunkel out of his truck before first responders could arrive.

“I remember somebody tapping on the window, and it was a young black gentleman, and he was like, ‘Do you want me to break the window?’ And I said, ‘Yes, I’m bleeding bad,'” said Kunkel. There was also another couple that pulled over in an SUV, a young couple, and then I believe the tow truck driver joined up on the scene — they were all kicking in the window trying to break it.”

Kunkel said he remembers the moments following the crash clearly. During the good Samaritan’s efforts, the tow truck driver grabbed a tool he had and managed to cut a whole out of the front windshield, pulling him out of the semitruck.

He also said he remembers the young couple making a tourniquet “out of the clothes on their backs” to stop the bleeding coming profusely from his arm.

“I just honestly want to thank the people that came to my aid when a lot of cars were passing me by, and the people that actually prove the angels do walk among us,” Kunkel said. “I wish I knew who they were, so I could personally thank them.”

Kunkel was treated at UC Davis Medical Center for his injuries and is now recovering at home. He said he will think twice next time before taking on shifts in potentially hazardous conditions.

“Before, I thought nothing could really push me over like that but it picked me up like I was a feather,” said Kunkel. “I mean, it was just amazing the velocity of that wind that night.”

Officials are reminding drivers to stay off the roads during severe weather as more high winds and heavy rain storms continue to threaten Northern California over the coming weeks.