Sacramento Kings’ victory beam: More than a feel-good story or a rally cry 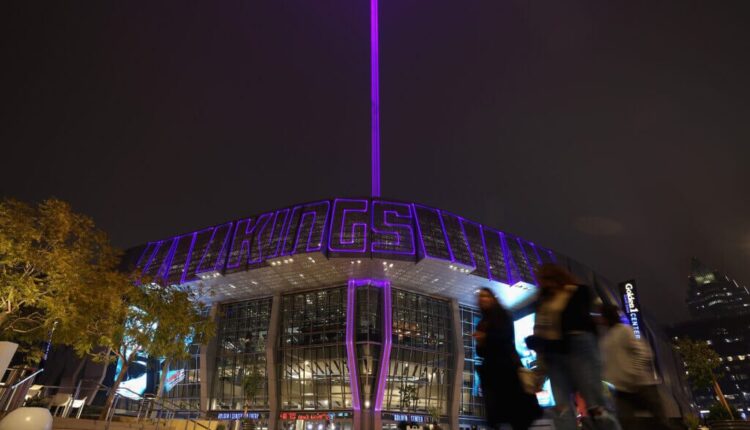 SACRAMENTO, Calif. — Few words can bring the Sacramento sports community together more than these three:

The Sacramento Kings have granted this request several times this season, lighting their victory beam and placing themselves among the top three in the standings of the NBA’s Western Conference.

For those unfamiliar, Sacramento lights lasers into the sky from the top of Golden 1 Center after every win — “further up than the human eye can see,” according to Kings owner Vivek Ranadivé. It was even briefly listed as a “place of worship” on Google Maps by the most devout fans.

The victory beam came to fruition after a brainstorming session with Ranadivé and Kings president of business operations John Rinehart. Originally, Rinehart was inspired by a fellow professional sports club in California. The Los Angeles Angels have the Big A Sign, a 230-foot metal structure shaped like the letter A, in their parking lot with a halo that lights up after every win.

Ranadivé then had a conversation with his friend David Kelley, founder of consulting and design firm IDEO, before Golden 1 Center was built. Kelley planted a seed in Ranadivé’s head that would later blossom into the beam. He advised Ranadivé to identify what his “purple lights” would be in reference to Kelley’s unique experiences on Virgin Atlantic flights, which have purple LED lights throughout their planes. As imaginative as Ranadivé is, he may not have envisioned the way the Sacramento community would embrace the beam.

“Golden 1 Center is about 100 feet away from us, so as soon as they win, we’ll have customers run upstairs to get a visual of the beam itself,” Dannie White, assistant general manager of Flatstick Pub in downtown Sacramento, told The Athletic. “I think it’s just Sacramento pride and sports pride.”

It isn’t just the fans or the community excited about the beam. The team itself has fully embraced it, as well. Various Sacramento players have taken to social media after wins to express their excitement about the beam.

Kings fans have had a lot to cheer about this season. De’Aaron Fox has been one of the league leaders in clutch points and has developed into one of the most talented young guards in the NBA. Domantas Sabonis seems to flirt with a triple-double each game, averaging 18.7 points, 12.5 rebounds and 7.4 assists. Kevin Huerter is on pace to set career highs in scoring and 3-point shooting, and Mike Brown is on the verge of coaching the team to its first postseason berth in 17 years.

For some, the energy surrounding victories — picture 17,000 fans at Golden 1 Center chanting “Light the beam!” — took some getting used to.

“I thought it was a little crazy to start the chant with two minutes and thirty seconds left,” Kings rookie Keegan Murray said after their 110-101 win over Bulls last month. “But it was all good.”


Kevin Huerter of the Kings pushes the button to light the beam after a game against the Denver Nuggets at Golden 1 Center. (Sergio Estrada / USA Today)

The chant can often be heard throughout Kings games, but it is loudest when the team is within striking distance of a win. These chants have even traveled throughout California. They most recently were heard at Crypto.com Arena, home of LeBron James and the Los Angeles Lakers.

Music to our ears 😌#LTB chants break out in LA 🟣🔦 #BeamTeam pic.twitter.com/JCD4EHEvKk

“We’ve heard (the chant) a few times in arenas, and every time I hear it, I get a little nervous because they start chanting it with a lot of time on the clock,” Brown said. “But it’s fun to see the Sacramento Kings jerseys on the road. We’ve got the best fans in the league. … We don’t just feel it in the arena, we feel it around town, too.

Back in downtown Sacramento, the ripple effect of the victory beam expands. Impound Comics, located 400 feet from Golden 1 Center, has created “Light the Beam” shirts that Kings fans are purchasing.

“It’s kind of become a thing that we’re usually more sold out than stocked, so we’re always ordering new ones,” Brent Sands, owner of Impound Comics, told The Athletic. “There are people who walk in now that may not have walked in before. They see the ‘Light the Beam’ shirts through the window, and they’ll come in and we’ll explain to them what we actually are.”

Each time the Kings build on their success and light the beam, local businesses have fresh opportunities to connect with new customers and the community as a whole.

“The Kings’ victory beam has been a catalyst for bringing this community together,” Derek Gallanosa, head brewer at Moksa Brewing Company in Rocklin, Calif., roughly 25 minutes from downtown Sacramento, told The Athletic. “With the possibility of the first playoff appearance in (17) years, this dedicated fan base is soaking in anything and everything Kings related.”

The last time Sacramento won 25 games by mid-January was 2004-05. That team finished 50-32, second in the Pacific Division and sixth in the Western Conference before losing in the first round of the playoffs to the third-seeded Seattle SuperSonics.

For a city without any NBA postseason action in nearly two decades, Sacramento feels a sense of optimism that may have once felt impossible to regain. The impact of winning — and the reward of the victory beam — cannot be overstated.

3 arrested for carjacking and robberies in northwest Fresno, police say