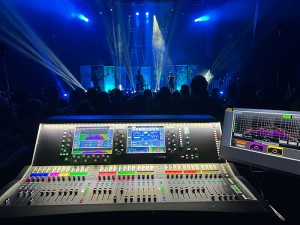 Front of house engineer Travis Wade first mixed on a live under some chaotic circumstances. “We were only expecting about six hundred people at a Suicidal Tendencies concert,” Wade recounted. “About four thousand attendees showed up.” The rental company did not have Wade’s usual audio console, but they assured him that the available dLive S5000 would be simple to learn. “I ended up having my mind blown by the desk. It was super easy to get going. I didn’t find myself having to navigate through many pages to get to the parameters I needed.”

Unfortunately, that concert only lasted about four songs before the crowd got out of hand and the production had to be halted for safety.

Since that fateful day, Wade has shifted to dLive for tours with Sacramento heavy rock band Dance Gavin Dance. Formed in 2005, the group has sold over a million records and performed in nearly 30 countries. “For this tour, I went with a dLive S7000 surface and a DM48 MixRack rented through Sacramento Production Services,” explained Wade. “It’s hands down my favorite desk I’ve ever been on. I’ve worked on consoles by many different manufacturers, and nothing could beat what it was like mixing on dLive.”

For additional I/O at the front of house position, Wade uses a DX168 expander which adds 16 dLive mic preamps and eight line outputs, and connects directly to a dedicated DX port on the back of his control surface.

When it comes to channel processing, Wade is thankful that he doesn’t need an external server to achieve the right sound. “Everyone’s had that nightmare where the external digital FX processor goes down mid-show and your entire mix is ​​gone,” said Wade. “That was a big draw for dLive for me, everything I need is built-in.”

In December of 2020, Dance Gavin Dance held a unique livestream performance from the historic Tower Bridge in Sacramento which Wade mixed and captured through his dLive. “We had only 12 hours to load in, get the performances, and tear down before they had to re-open the bridge for traffic,” recalled Wade. “We didn’t have time for any errors.” Luckily, his dLive served him well – allowing him to mix and capture individual tracks to a computer via Dante.

Dance Gavin Dance is set to perform next at the upcoming When We Were Young festival in Las Vegas this October, alongside other big name rock groups such as My Chemical Romance and Paramore. For future tour dates in Europe, Wade noted that he will be bringing along a C1500 dLive surface to maintain the same processing power in a more portable form factor: “It is under the weight limit for airlines, which means I can fly with it no issue.”

BNC and NUIC stats and standings after Week 2

Will Fresno Dems Pay a Price for Backing GOP School Board Candidate? – GVWire