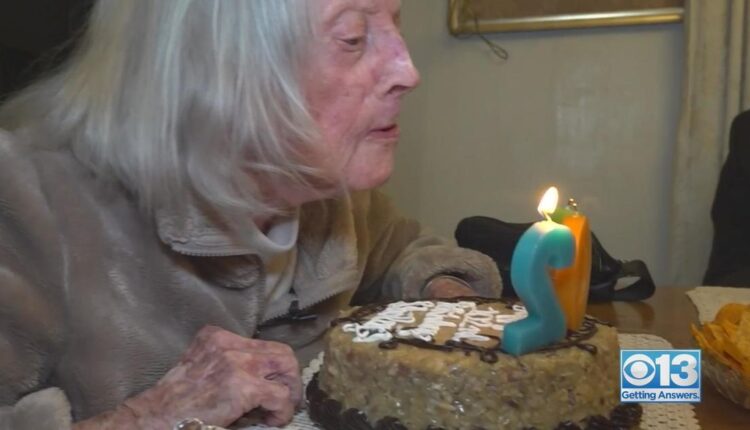 SACRAMENTO – Shirley Allen was surrounded by family and met with applause as she blew out the large candles on her 102nd birthday Tuesday, Jan 17.

For more than a century, Allen has marked another year gone by, but she’s never taken one for granted.

Born in 1921, life took her across California throughout childhood. Born in El Centro, she lived in Los Angeles, San Diego, Santa Barbara, Visalia and Sacramento, where she returned in 1986.

Her father was the general manager of Globe Mills, a booming industry that milled wheat and flour for 40 years. It was eventually bought by Pillsbury. The job moved their family all over, and even to Mexico City where Shirley then lived for more than 50 years. It was here she found and cultivated her passion for teaching.

“It’s my life. It’s what I like to do,” said Allen. “As a child, I would go to school, come home, and then I would teach the dolls what I had learned that day in school,” Allen said with a laugh. “It’s crazy, I know.”

She taught English to Spanish speakers for half of her life. She married her husband Jose in Mexico City, and there she founded an English-teaching academy called “The American School.”

To her students, she would say: “Educate yourself. Do what you want to do.”

But for Allen, a life teaching simply was not enough.

After moving back to Sacramento, Shirley took her own advice. She went back to school at the ripe age of 76 to earn her first degree at Cosumnes River College. Over the next 14 years, she would earn eight more.

The nine degrees are all hung in rows proudly on Allen’s bedroom wall, surrounded by a dozen more certificates of recognition. The degrees range from science, anthropology, education, Spanish and more from both Cosumnes River College and Sacramento City College.

“The gentleman who would give out the degrees in the ceremony would say, ‘you again?'” laughed Allen. “They got tired of me.”

She maintained a 4.0 GPA the whole time. This teacher loved being the student.

Now, she spends her days peacefully, knitting for her family, admittedly bored. She is sharp as a whip and in great health.

She wishes at times things were like they were gone in days long, saying people are not as kind as they once were.

“You know what? People have gotten too greedy. They want, want, want. It isn’t that. You have to give,” Allen said.

The matriarch of her family has spent the past century both giving back and truly living – and she has no plans of stopping.

She says she never drank, never smoked and never did drugs.

But she also attributes her life-long curiosity and pursuit of knowledge for nine decades to where she is today.

When Allen was asked how she spends her birthdays after more than 100 of them, she looked around at her family and relished a life well lived.

“Here I am with them. That’s enough,” Allen said.

What Older Americans Need to Know About Taking Paxlovid

One person hospitalized after car crashes into tree in north Fresno