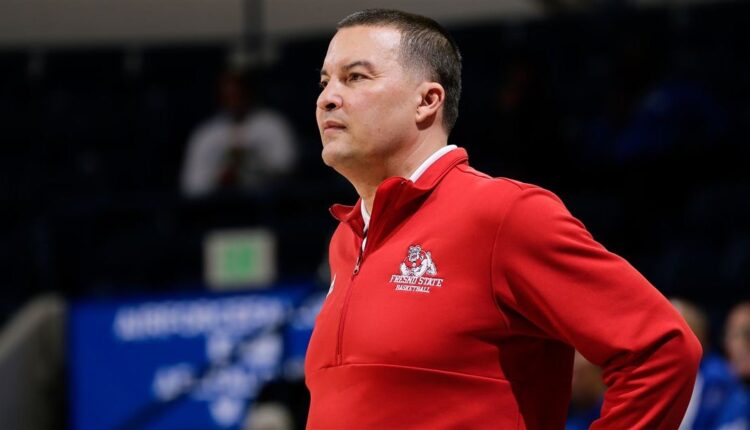 The Fresno State Bulldogs traveled to rival San Jose State with a short-handed roster available. The Bulldogs couldn’t keep up with SJSU’s 12 makes from 3-point range and fell 74-64 to the Spartans. The result marked the end of an 11-game series winning streak for the ‘Dogs against rival San Jose State.

Fresno State made the short trip to Provident Credit Union Event Center with only eight players in uniform and only seven who played – one of which left the game with an injury. Most notably, second-leading scorer Jemarl Baker was unexpectedly unavailable with injury.

The Spartans were able to create distance early with an 8-0 run highlighted by back-to-back 3-pointers from Omari Moore and Alvaro Cardenas for an early 16-8 lead. The short-handed Bulldogs played catch-up the rest of the way.

The Bulldogs battled back to get within 23-21, but SJSU answered. Former Bulldog and current Spartan Robert Vaihola put in a layup and Cardenas hit once again from 3-point range. Sage Tolbert and Moore connected on another pair of 3-pointers late in the half. Anthony Holland kept Fresno State afloat with several 3-pointers, but Ibrahima Diallo added two more points before the buzzer to give SJSU a 36-30 advantage going into halftime.

SJSU dropped 8-of-17 shots from 3-point range en route to their halftime advantage. The Spartans also shot 52 percent from the field.

San Jose State widened the gap early in the second half and fended off several Bulldog comeback attempts. SJSU used an early six point spurt with buckets from Trey Anderson, Tolbert and Diallo’s dunk to make it a 42-32 Spartan lead.

Fresno State quickly answered with an and-one by Eduardo Andre and a 3-pointer by Isaiah Hill. But then came another Spartan run as Cardenas hit a jumper and a 3-pointer, Tolbert scored a layup and Cardenas connected again from 3-point range for a 10-0 run and a 52-38 lead. Meanwhile, Hill left the game with a head injury and left the ‘Dogs with just six players.

SJSU led by double digits until a run by the Bulldogs with under eight minutes to go. Andre sparked Fresno State with a run as Bulldog guard Donavan Yap scored seven straight points capped by a 3-pointer.

But Fresno State’s 60-56 deficit quickly turned into another lopsided Spartan lead when Cardenas answered with yet another 3-pointer. Cardenas stole the ball from Yap on the ensuing possession and found Tibet Goerener for an open dunk. Vaihola made it seven straight points with a layup for a 67-56 SJSU lead with 4:23 remaining. SJSU maintained a lead of at least eight points the rest of the way.

Despite playing only seven players and seeing Hill leave the game with injury, the Bulldogs put up 28 points off the bench. Andre had 15 points and 4 rebounds while Yap had 13 points and 5 assists. But it was Anthony Holland who led the ‘Dogs with 18 points on 6-of-10 makes from 3-point range. Hill had 12 points and 4 assists before leaving the game with a head injury. The other three players – (leading scorer on the season ) Isaih Moore, Leo Colimerio and Jordan Campbell – combined for just six points on 3-of-11 shots. Moore had 9 rebounds.

Cardenas led the Spartans’ victory with 20 points on 7-of-14 from the field and 6-of-11 from 3-point range. He was also one assist shy of a double-double with 9. Omari Moore scored 15 points with 8 assists and 5 rebounds. Tolbert had 12 points and 6 rebounds, Diallo had 8 points 8 rebounds and 2 blocks, and Vaihola finished with 12 points, 7 rebounds and 2 blocks against his former team.

SJSU finished with a 54 percent shooting clip – 21 of the Spartans’ 31 makes were assisted. The Spartans out rebounded the Bulldogs 34-24. SJSU did not need a single free throw as they missed all five attempts.

Fresno State falls to 6-10 overall and 2-3 in Mountain West play. San Jose State improves to 12-6 overall and 3-2 in conference. They will meet again in Fresno on Feb. 7.

The Bulldogs end their two-game road trip with a pair of losses, coming off of a Top 25 upset win at home over New Mexico. The Bulldogs will return home for the first time since on Saturday. The ‘Dogs host Air Force at 4 pm PT on Jan 14.