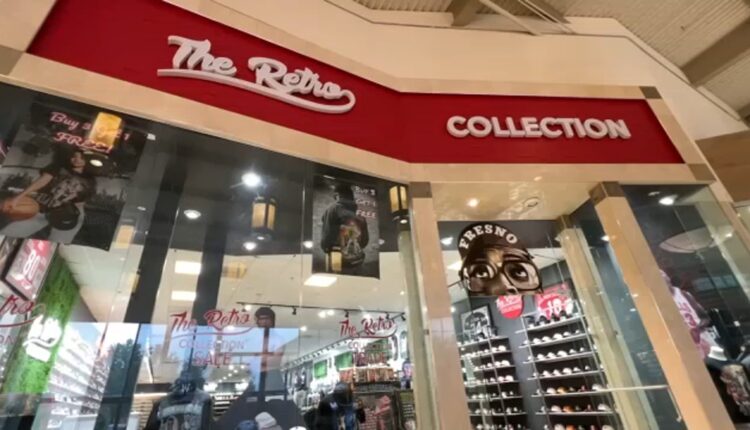 Fresno, Calif. (KFSN) — Shoppers with a passion for streetwear and sneakers have found their go-to store in Fashion Fair.

The Retro Collection, next to Forever 21, opened during the pandemic.

Rick Salinas said owning a store became his goal after spending time helping his dad in his own business endeavors.

“As a child, myself and my brother, we’d go with him to go help out and we started from there,” Salinas said. “We did our own booth and stuff at the age of eight or nine.”

Traveling across California – Salinas and his brother would help their dad sell shirts at swap meets.

It was his dad’s passion and work ethic that inspired Rick to dream bigger.

“He challenged us to create our own stuff, so that’s when we took up designing,” Salinas recalled.

Now, he has a whole store at Fashion Fair filled with his own designs.

“Our goal was to bring something to Fresno that’s pretty unique,” said Salinas.

The Retro Collection offers the latest in streetwear, such as vintage shirts and hats.

“It’s cool to go around town and see our shirts on people, or hats,” said employee Martina Ebnercignetti.

A whole wall displays the hottest kicks from Nike, Air Jordan and Adidas Yeezy – some styles are difficult to find in stores or online.

“It’s really hard to get certain stuff, especially if they’ve been discontinued or they’re not making anything right now. It gets really really hard but that’s kind of where we come into play. If we can get our hands on it, we’ll for sure have it in store,” explained Roy Salinas, the store’s bulk buyer.

The Retro Collection also brings in sneakerheads from across the state who are interested in selling or trading their shoes.

You can find local athletes including Fresno State’s Jalen Cropper and boxer Marc Castro rocking The Retro Collection, which has helped get the store’s name out to a much larger audience.

“They come in asking for all that stuff, and we’re like “Oh yeah, that’s the one Jalen Copper was wearing. This is the one Marc had,'” said manager Fernando Quintero.

In just two years, the store has evolved and staff said it’s because of the community’s support, which is why the business makes an effort to give back to local schools and charities.

As they look toward the new year, staff is excited for what’s to come – saying this is only the beginning for The Retro Collection.