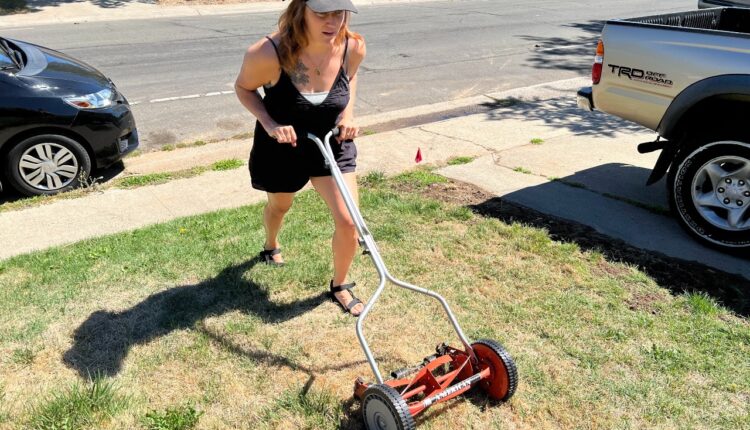 California is in the midst of its driest period in at least 1,200 years, according to a recent study in the journal NatureClimate Change. And, climatologists say early predictions point toward yet another below-average rainy season in the coming months that would only worsen the already extreme drought conditions.

Governor Gavin Newsom has called for water conservation but the state has struggled to meet the recommended targets.

One move some cities are making to speed up water-saving efforts is to target the areas that produce the most waste. On the residential front, which makes up about 10% of water use in the state, this means lawns.

Jeffrey Mount, an expert in water issues at the non-partisan think tank Public Policy Institute of California, says more than half of urban water use goes to landscaping, with grass — or turf as it’s called by experts — being the thirtiest component.

Mount has a couple of dogs and says he understands the need for grass, but stresses less is more for this bone-dry state.

“There are reasons to have a lawn and so a lot can be done by just shrinking the size of the lawn,” Mount says. “A number of turf types have emerged over the last 10 years. They’re not nearly as thirsty. They still use a lot of water, I want to be clear on that. If it’s green like that, it’s still using a lot of water, but they are more efficient.”

One reason so much water is wasted on lawns is that irrigation often runs off beyond the patch of grass and down the drain. The city of Sacramento has rules in place to reduce the amount of water used for landscaping.

Homeowners are restricted to watering just two days a week and only between 7 pm and 10 am The city also says letting water run onto sidewalks or into gutters is “not allowed”.

A front yard in East Sacramento where lawn sprinklers are running contrary to city rules: wrong time of day, wrong day of the week, and water running off of the property onto the sidewalk and into the gutter.Randol White / CapRadio

However, it’s not unusual to find examples of all these rules being broken. The city has received more than 1,000 complaints in the past year, with more than 500 in the past three months.

Those who are officially cited for failing to comply with the city’s water rules will first get a warning. After that the fines jump from $50 for a second notice on up to $1,000 for a fourth notice within a year.

Sacramento is also paying homeowners up to $3,000 to replace their turf with river-and-drought-friendly landscaping that can also provide shade for the valley’s increasingly hot summers.

Shawnecee Schneider and her husband are among those who are taking advantage of the program.

“Having a lawn takes so much maintenance and time,” Schneider says. “You have to thatch it and fertilize it and seed it again and then water it some more.”

But she says, the big reason they’re pulling out the grass in front of their home in the Fruitridge Manor neighborhood is because of the city’s rebate offer.

She says they now have an opportunity to create a landscaped yard that will require far less work, while attracting pollinators and adding to the beauty of their neighborhood.

Some studies show that when one neighbor makes a change to their landscaping, others follow. That’s according to pProfessor Alessandro Ossola, a researcher at UC Davis who’s an expert in residential landscapes and climate change.

Ossola is a fan of turf conversion but says there’s really a better tool for limiting water use: higher prices.

“Overall, the cost of water across the entire state, across different sectors, in my opinion, should be raised,” Ossola says.

That’s what they’ve done in both Israel and Australia. And, as a result, Ossola says people in those two very dry countries use up to half as much water as Californians. He says, given the state’s current drought conditions, the time is right for lawmakers in Sacramento to consider similar ideas.

“California, we need to rethink the entire water system,” Ossola says. “So, now there is the opportunity to push ambitious policies that are going to potentially fix the problem for the next 50 to 100 years.”

But for the immediate future, yards are still the best place to look for potential waste within the residential sector.

Some worry that trees could suffer if people cut back too much on watering their yards. For the past four years, the Sacramento Tree Foundation has teamed up with the Sacramento area’s Regional Water Authority to educate the public about how to conserve water while also keeping trees healthy during the drought.

“Most trees need some supplemental water to survive dry months, and while local restrictions vary, most water providers allow exceptions for watering trees because they are so essential for healthy communities,” tree foundation spokesperon Stephanie Robinson sais. “Lawns can recover or easily be reinstalled, but mature trees will take decades to replace once they are lost.”

The organizations have pointed to satellite imagery that shows how the city’s urban tree canopy took a hit during the last drought.

The foundation says newly planted and younger trees might not survive without proper water. You should plan to water these trees as often as a few times a week for the first three years after planting. However, many older, established trees only need watering once a month, and some types of older, native trees might not need it at all.