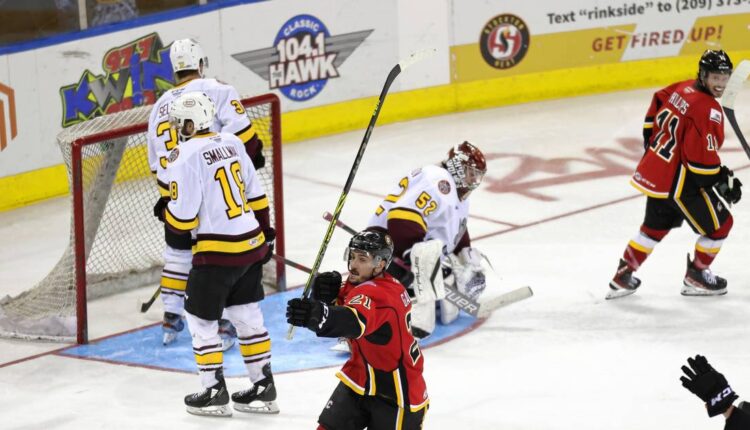 STOCKTON, Calif. — The Chicago Wolves must wait another day to clinch the Western Conference Finals as the Stockton Heat rallied to claim a 4-3 overtime victory in Game 4 Friday night at Stockton Arena.

After the Heat’s Glenn Gawdin scored with 49 seconds left in regulation to force extra time, Gawdin delivered the game-winner on the power play 6:43 into overtime to prevent the Wolves from earning the four-game sweep.

The Wolves struck first for the fifth game in a row as Drury knocked in a rebound on the game’s first power play at 4:40 of the first. Poturalski, working along the left half-wall, fed Noesen for a stuff attempt from just outside the crease. The rebound went right to Drury at the bottom of the right circle and he poked home his seventh postseason goal.

Stockton (7-4) evened the score at 16:08 of the first. Kochetkov ventured behind the net to play the puck, but Stockton’s Byron Froese knocked it loose and Martin Pospisil shoveled it into the net.

The Wolves regained the lead on Poturalski’s goal 1:57 into the second. Poturalski launched the rush and fed the puck ahead to defenseman Cavan Fitzgerald, who carried it into the offensive zone and dished to Noesen along the left half-wall. Noesen waited for Poturalski to find open space in the slot, set him up in stride and Poturalski wristed the puck past goaltender Dustin Wolf’s glove for the 2-1 edge.

Leivo gave Chicago a crucial insurance goal at 4:56 in the third. Jack Drury knocked away the puck in the defensive zone and Gust caught up to it along the right wing in the offensive zone. The Orland Park native stopped on a dime at the right faceoff circle, spied Leivo open at the far post and put the pass on the tape for Leivo’s AHL-best 10th postseason goal.

That marker proved necessary when Stockton responded eight seconds later with Justin Kirkland’s rebound goal to make it 3-2 at 5:04.

The Wolves killed off three Stockton power plays down the stretch, but the Heat pulled their goaltender and Gawdin knocked home a rebound with 49 seconds left in regulation to force overtime. Wolf (7-4) finished with 31 saves in the win.

The Wolves stay in Stockton to play Game 5 at 8 pm Saturday. If the series requires more than five games, then the Wolves host Game 6 at 7 pm Tuesday and Game 7 at 7 pm Wednesday at Allstate Arena.

Here are things to do this weekend in Northern California