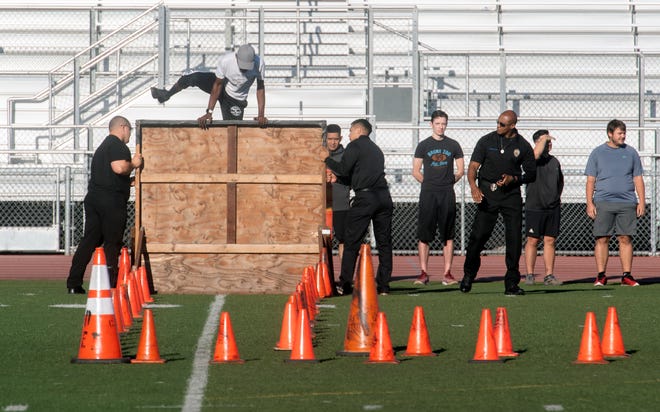 About 60 recruits hoping to join the ranks of the Stockton Police Department were tested on their physical fitness bright and early Aug. 13 at Stagg High School’s football field.

Stockton Police Chief Stanley McFadden, who’s been on the job just more than two months, said he’s ramping up the pace of recruitment and shortening the time from contact to job offer. Aug 13 was the first time Stockton Police recruits had tested their mettle since June.

“Before (offers) were taking much longer. (Recruits) are going to go for the first offer that comes, because they don’t know if another one’s coming. Now we’re competitive there,” McFadden said as recruits hustled out the last leg of their run on the track. “The (testing) is a big change. Historically, we’d have a testing phase, a closing date and then there’d be a few months off … Now we’re doing it continuously, we’re always looking at applications and having these testing processes ongoing now.”

At 391 sworn officers, the Stockton Police Department faces a chronic retention problem— Stockton’s rank-and-file officers are paid less than other departments in the region. McFadden said creating a relationship from the start of recruitment goes a long way toward retention. A police officer is now in contact with recruits from the moment they begin, checking in and helping them prepare for testing throughout the entire process.

“We’re starting to value them before they even become employed with the city. I think the main thing is you have to show people you care,” McFadden said. “I’ve been having conversations with those who’ve left the department and they haven’t all left for money reasons … (money) got factored in at some point, but a lot were saying they just didn’t know what was coming . They had an interim chief … it just goes back to the importance of communication, being transparent and having those conversations.”

“Some are semi-pro teams where only 3-5% are going to make it to the league so they need to have another plan. I’m encouraging them to take a look at what we can do,” McFadden said. “We have a lot of similarities as far as what they have in athletics … I athlete thinks are just phenomenal candidates to be in that public service.”

Qualified recruits are sent to academies at San Joaquin Delta College, Alameda County, South Bay Regional Training Consortium, Alameda, Napa and Stanislaus Counties. According to the department, the eight-month process from hire through the academy costs an average of $52,000 per person over the past two years, not including equipment or background personnel.