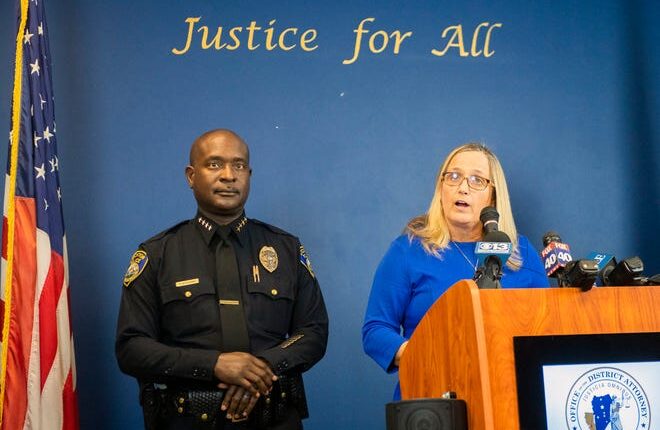 The Stockton Police Department privately apologized to a woman for not taking her case seriously enough after she was allegedly the first target in Stockton to be shot by a man suspected of a series of shootings of some unhoused people.

Natasha LaTour may be the only surviving victim of alleged serial killer Wesley Brownlee after she was shot 20 months ago.

Police said they apologized to LaTour, a 48-year-old Creole woman who was unsheltered at the time of her shooting, for failing to conduct a follow-up investigation after she was shot several times in April 2021 in Stockton.

LaTour is angry, not only for herself, but for the people that died after her, allegedly by the same hand. Despite feeling that the apologies given to her were sincere, she says if authorities would have taken her case seriously, it could have possibly prevented the deaths of five innocent people.

The spokesperson for the Stockton Police Department, along with Chief Stanley McFadden, apologized to LaTour shortly before a vigil began on Oct. 19 in front of City Hall to honor the six men who were fatally shot between April 2021 and September of this year in Stockton and Oakland.

“They offered me an apology in regard to how the case was handled,” said LaTour.

“They were all whispered, it wasn’t on a microphone,” she said.

Joseph Silva, the Stockton Police Department public information officer, said he and some of the members of the department did apologize to LaTour.

“The chief and I apologized to her and the reason for that was because she’s a victim of a violent crime and she was apologized to because of a follow up that was not conducted during her investigation,” said Silva.

A second investigation did not occur until early October of this year, but by then five people had been killed, LaTour said.

“It’s clear to me there are people that are dead because they (police) didn’t reach out,” said LaTour.

Police announced on Sept. 30 of this year that a series of homicides claiming the lives of five people were believed to be connected.

The Stockton Police Department then revealed that two additional cases had also been linked with the previous shootings: a fatal shooting of a 40-year-old Hispanic man in Oakland on April 10, 2021, and an attempted murder in Stockton on April 16, 2021 , when a 46-year-old Black woman, LaTour, was shot at Park and Union streets.

LaTour confirmed that although police identified her as a “Black woman” — she identifies as Creole — it was her shooting that they reported.

San Joaquin County prosecutors said in October that an unerring “ghost gun” found in Brownlee’s possession at his arrest had allegedly been tied to the shootings through ballistic evidence.

After midnight on April 16, 2021, LaTour said she had been at her storage unit, a place where she typically changed after she became unsheltered during the pandemic. She said she had stopped to buy a beanie and sweatshirt before riding her bike over the train tracks to Park and Union streets.

It was about 3 am when she heard movement in some gravel near her and decided to turn around and look at the noise.

“I turned, I looked, and when I looked this person already had a weapon drawn, the gun was out,” alleged LaTour.

She said she felt the wind of the train passing by at full force as her shooter remained silent and began firing multiple gunshots at her.

“I’m thinking, this is pure genius — no one’s going to hear these gunshots,” she said.

Stockton Police Department detectives said in a Facebook post that the shooting victim on that day described the suspect as a male of unknown race, 5 feet 10 inches to 6 feet tall with a thin build, and was wearing a dark colored hooded sweatshirt with the hood Pulled up and dark colored pants.

LaTour’s attacker was wearing an all-black COVID-19 style mask, making it difficult for her to identify the shooter, she said.

As LaTour was lying on the ground, she was scared and knew she needed to get herself to the street to get help, she said, but she felt sleepy. Somehow, she crawled out into the street to seek help while remembering her late grandmother.

LaTour said she is unsure how many cars drove by while she was on the ground, but one vehicle stopped, drove about a block away and called for help.

“Don’t worry, I’m calling 911 for you mija,” said the passerby, who remains unknown to LaTour.

According to the Stockton Police Department’s incident report, Officers Shawn Marques and David Hayden arrived on scene at 3:27 am

Officer Hayden’s report said LaTour was taken to a hospital where she was in critical but stable condition.

According to San Joaquin County District Attorney Tori Verber Salazar, Brownlee was charged with only three of the suspected shootings in October because prosecutors had sufficient evidence for the shootings. He is next scheduled to be in court on Jan 3.

LaTour said because police failed to reach out to her for a second investigation, she feels that her life was not a priority to the police officials.

“It feels horrible, but it feels a million times worse to know that people are dead behind it too,” said LaTour. “The more I think about it, the more it makes me wonder if maybe I wasn’t even the second one shot.”