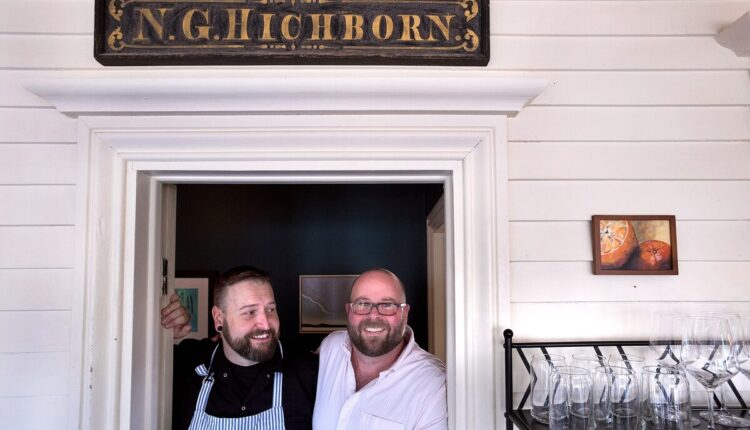 The owners of The Hichborn, a fine dining restaurant in Stockton Springs, are worried that their business may be in jeopardy after a town selectman has delayed the renewal of their liquor license.

The delay came in response to an incident that happened on June 12 at Hey Sailor! in Searsport, a restaurant also owned by Charlie Zorich and Kirk Linder. The precise details of what happened that day, though, depends on who you ask.

At the July 25 board meeting, Selectman Darren Shute told the town manager and the other board members that he and his wife were at the Searsport restaurant when out of the blue, Linder allegedly threw him out, verbally assaulted him and chased him 100 feet down the street.

“We have no idea where the whole thing stemmed from, and we’re still aghast at it,” the selectman said at the meeting, which was audio recorded. “Is there a substance abuse issue? A mental health issue? Or an old management issue?”

But Linder and Zorich, who are partners in life as well as business, see those allegations as undermining their reputation. They and bartender Ian Gould paint a different picture of what happened that day at Searsport.

“The reason this situation started is because we do not serve Coors Light, and the gentleman was unhappy about that,” Gould said Monday. “Some people choose weird hills to die on.”

Linder and Zorich believe the situation is a case of abuse of power with overtones of homophobia. It has cast a long shadow over their lives over the past few weeks, even to the point of them wondering if Stockton Springs is the right place for their home and restaurant.

“I can’t focus on anything else. I want it resolved. There’s a lot of big questions,” Zorich said. “But I’m not going to live in fear of somebody, and I’m not going to hide, either. We are who we are. And we’ve done a lot for this community and this town, whether they want to admit it or not.”

The two stories have some similarities though. Both sides say that Coors Light was discussed. Both say the selectman and his wife told Linder they don’t like Mexican food. And both say that Shute and his wife were asked to leave. But they differ on what happened next.

After a couple of minutes, Shute and his wife got up to leave. Linder had returned to the bar.

“The guy came up to Kirk again and said, ‘I’m a selectman, and this won’t be the last time you’ll hear from me,’ or something to that effect,” Gould said. “I thought it was hilarious. I was honestly like, is this guy … serious right now? I’m not used to small town Maine at all. I’m from Boston.”

Linder said that the parting phrase had an incendiary effect on him.

“That was the threat that got me all fired up. I got up from my barstool. I simply ushered, or escorted him to the door. When I got to the edge of my property, he turned around, took a couple steps towards me and poked me in the chest.”

Linder raised his arms, and said, “Are you going to hit me? Go ahead, hit me,” he said.

At that point, Shute walked away, according to Linder.

But Shute’s version is different. He said after speaking to Linder, he initially said they’d stay to eat despite not being fond of the specialty. But his wife disagreed.

Shute said that Linder chased them down the block, yelling that they were homophobes.

“When I turned around, he was right on my butt. I pointed at him and he ran into my finger,” Shute said. “He said, ‘You assaulted me — the next time I’ll kill you.'”

Gould confirmed something happened outside the restaurant.

“They had a verbal altercation outside, and the guy ended up pushing Kirk, which was out of line,” Gould said.

Neither Shute nor Linder called the police to report the incident, which both men said left them feeling distressed.

“It was the worst thing we’ve ever experienced in our lives,” Shute said. We’ve never been treated like that. Never ever … We’re not homophobic. I’ve got a niece that’s married to a girl.”

Linder said that the interaction left him shaking. But what’s happened in the past few weeks has made things feel worse. They’ve heard from people in the community who believe Shute’s version of events, and said things about them that are accusatory and troubling.

“This has gone much too far. Our reputation has been irretrievably damaged,” Linder said. “There’s a contingent of people who will always believe his story.”

Stockton Springs Town Manager Mac Smith said that he and the other selectmen present at the July 25 meeting, Betsy Bradley and Marsha Shute, who is a second cousin to Darren Shute, were caught by surprise when Darren Shute brought up his concerns about The Hichborn’s liquor license. The Hichborn has had no police or other complaints, the town manager said.

“Mr. Shute’s statements, what he requested and all that, came out of the blue for me, and I believe the other two board members,” Smith said. “Normally I would have said, ‘Let me research this, and we’ll come back at the next meeting and go from there.’”

But because The Hichborn’s liquor license is set to expire on Aug. 27, the board scheduled a public hearing over the license renewal request for 8 am Monday, Aug. 8.

When Zorich and Linder learned last that their liquor license had simply not been renewed but had been scheduled for a public hearing, they spoke with their attorney and ultimately decided that they needed to let people know what was going on.

“I don’t understand how three people sitting in a room, or four people, can be so flippant with our business, or our reputations. What gives them the right?” Zorich said.

A post they shared on Facebook and Instagram on Friday has been shared widely, and Smith said that he’s received about 40 emails so far, with all but one in support of The Hichborn.

That support hath meant the world to Linder and Zorich.

“That’s what’s really helping us get through it,” Linder said.

More articles from the BDN