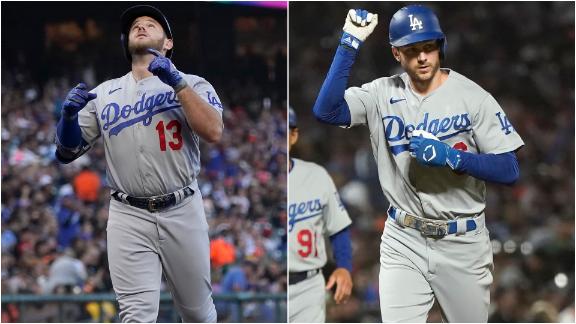 Freddie Freeman had three hits, including a double, and two RBI as the Dodgers won for the fifth time in six games to improve to 23-5 since June 30.

Wilmer Flores hit his team-leading 16th homer for the Giants, who are 3-9 since the All-Star break after winning five of their previous six.

Turner had a sacrifice fly, Freeman hit an RBI single and Will Smith added a run-scoring double off Giants starter Logan Webb (9-5) in a three-run third in which Los Angeles broke open a 2-1 game. Smith had another RBI double in the sixth to push Los Angeles’ lead to 6-1.

Webb gave up six earned runs and eight hits in five innings. He struck out two and walked one. The Giants have lost eight of their staff ace’s last 12 starts.

“I just thought that we had a really good game plan and to the credit of the players, they took it into the game,” Dodgers manager Dave Roberts said. “I think with Webb you’ve got to be able to use the whole field, the big part of the field and we did a really nice job.”

Andrew Heaney gave up one run and four hits in four innings in his second start since coming of the injured list (left shoulder inflammation). He struck out seven and walked two.

Caleb Ferguson (1-0) worked a scoreless sixth for the win.

Muncy’s homer, a two-run shot off Webb, gave Los Angeles a 2-1 lead in the second after Heaney walked in a run in the first inning.

“I don’t necessarily like coming here, but I seem to hit pretty good here, so maybe I should enjoy it a little bit more,” Muncy said. “But it’s just good to go out there and get a win and its more important for me to do something to help the team win.”

Flores homered off Chris Martin for the only run the newly acquired right-hander allowed in his Dodgers debut.

“He’s been very consistent, not just this year but over the last couple of years, and this is best defensive play we’ve seen from him period (at second base),” Giants manager Gabe Kapler said of Flores. “You couldn’t ask for anything more of him.”

Dodgers rookie James Outman was 2 for 2 with a double. He’s 5 for 6 through his first two career games after going 3 for 4 with a homer Sunday in his major league debut in Colorado.

“It’s pretty rare and good to see a young player just player not let the emotions get to you and speed the game up,” Roberts said.

“When he’s commanding all three of his pitches he’s really tough but today I think he caught some plate against some really good hitters,” Kapler said.

The Dodgers acquired OF German Tapia in a trade with the Tampa Bay Ray in exchange for LHP Garrett Cleavinger.

Dodgers: RHP Blake Treinen (shoulder) has joined the team and is scheduled to throw a simulated game Wednesday, Roberts said.

Did Daniel Landeros of Elk Grove and Sacramento Die Because of Police Brutality or Himself?