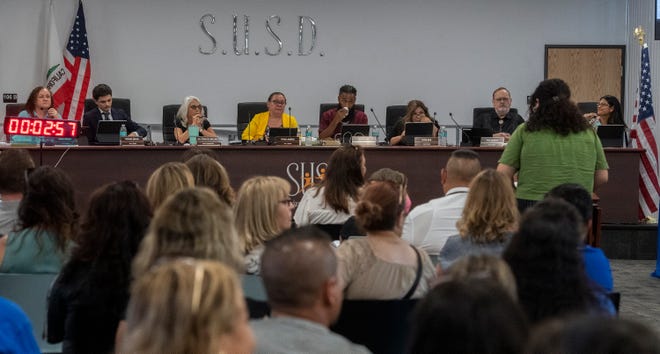 In disagreement with San Joaquin County Superintendent of Schools Troy Brown, the Stockton Unified School District Board of Trustees did not acknowledge former Superintendent John Ramirez Jr.’s “superintendent emeritus” position as one of employment.

“It is disappointing that the SUSD Governing Board refuses to accept that it violated the Brown Act,” Brown said in a statement. “The board ultimately approved (to) continue to refer to the Ramirez agreement as a resignation agreement only. The agreement is clearly also an employment agreement.”

At the Sept. 13 Stockton Unified Board of Trustees meeting, the board voted 5-2 — Trustees Maria Mendez and AngelAnn Flores voted no — in open session to “reaffirm” Ramirez’s separation agreement with SUSD. The agreement states, “Ramirez’s employment as Superintendent Emeritus,” for him to serve and report directly to the board, provide transition assistance and have duties assigned by the board president with full salary of $285,000 plus benefits for one year.

Stockton Unified Attorney Dr. Jack Lipton reiterated that Ramirez’s separation agreement was not one of employment. He said there has been no transition work between SUSD and Ramirez.

Stockton Unified board president:‘We’re not having any more town halls right now’

Brown’s Aug.31 letter said the SUSD board “violated important public rights” when it took “illegal action” when it hired Ramirez behind closed doors at a June 9 special board meeting. California law forbids calling special meetings to discuss executive compensation. The board also failed to orally report Ramirez’s new hire June 9 in its entirety as required by law.

Related:SUSD board disputes nearly half of SJ grand jury findings

Brown demanded the SUSD board respind the action taken June 9 to employ Ramirez as “superintendent emeritus.” The letter stated if the board chooses to take further action to employ Ramirez, it must do so at a regular board meeting and to make the required oral report for final action on compensation.

Though the Stockton Unified board’s actions Sept. 13 did not reflect all of Brown’s demands or viewpoint, they still technically have 30 days to adhere to the demands of Brown’s Aug. 31 “cure and correct” letter. San Joaquin County District Attorney Tori Verber Salazar previously said she will be keeping an eye on the board’s actions over the 30-day period.

Ramirez resigned June 9 after just more than a year as superintendent, citing he needed to care for his elderly parents. Less than a month after his departure, the San Joaquin County Grand Jury released a scathing report showing financial mismanagement, poor business practices and a lack of transparency at Stockton Unified.

Ramirez was placed “on leave” from his superintendent emeritus role after he was arrested Aug. 25 for driving under the influence of alcohol with a blood alcohol level of .225%. Upon news of his arrest, Stockton Unified released a statement saying Ramirez is no longer working in a capacity as superintendent, has no contact with students or employees and is no longer on any school sites. The district did not answer any additional questions on his employment status.

Sacramento holds more world records than one might think

The Fresno Greek Fest is celebrating its 60th anniversary