These restaurants are taking part in the Stockton Vegan Chef Challenge 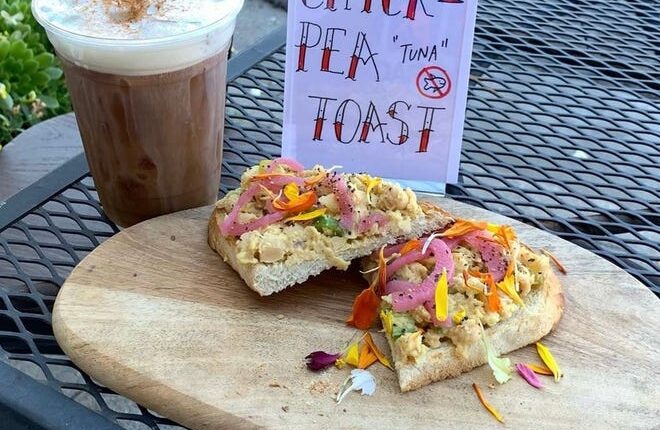 There are currently seven participating restaurants and pop-up shops in the Stockton challenge. The public is encouraged to vote for their favorite dishes. The winning dishes will be announced in July.

Women-owned and vegan-owned fruit vendor Fruitopia Fruit Bowls pop-up shop can be found at the San Joaquin Certified Farmers Markets in Tracy on Saturdays and in Stockton on Sundays.

“I just hope that you know, we don’t forget our true roots of veganism and you know, it does really originate from fresh produce … that’s what I’m really about.” Kristina Ruiz, owner of Fruitopia Fruit Bowls, said.

Her new menu items for the challenge include parfaits with vanilla or raspberry dairy-free yogurt, with the choice of 12 different local and organic fruits and with a choice of toppings, an “Orange Dream” pressed juice with vanilla almond milk, and “Beet ‘n’ Berry” acai juice with frozen blueberries.

“It’s really important for me to participate because I think it would just help bring a lot of awareness for veganism to the community,” Ruiz said.

Ruiz’s parfait idea was one that she credits her daughter and one she plans on keeping on her menu even after the challenge concludes.

The Stockton Vegan Challenge kicked off on June 1, and will run through June 30.

With a menu that already checks off many boxes for many clients with all dietary needs, The Downtowner is joining the challenge.

“It was important for us to kind of spread the word that vegan food doesn’t have to be bland or boring. It can be delicious and satisfying whether you’re vegan or non-vegan alike,” said Amy Smith, manager at The Downtowner.

“I think anyone who has tasted our food realizes we do things a little bit differently,” Smith said. “We add kind of a little spice and flair to everything we cook and I think if they give it a try, they’ll have a very unique vegan experience.”

Terra Coffee has opened the doors to the vegan world by taking on the challenge.

A chickpea toast and a cold brew with a vegan-friendly cold foam is debuting for the challenge. This is also the first-time cold foam has been introduced to Terra’s Coffee menu.

More vegan chef challenge menu items like housemaid hummus, pita bread, and a seasonal muffin will slowly be added throughout the month of June.

“We’re just trying our best to offer some vegan-friendly options that we hope that even those who don’t consider themselves vegan, enjoy too,” Garcia said.

Nika’s Mad Sweets specializes in Asian, Islander, and Filipino baked goods with a modern twist. She joined the challenge because she wanted to challenge herself and her skills as well as showcase vegan Filipino and Asian-inspired desserts.

“I don’t see a lot of like vegan Filipino or Asian-inspired desserts around so it’s really kind of like out of the box, out of the ordinary,” Annika-Mie Racadio, pastry chef and co-owner of Nika’s Mad Sweets , said.

“I love seeing the Stockton community come together and seeing that even people that aren’t vegan being open to trying vegan stuff and it’s really nice to be able to participate in that and to show them that not all vegan baked goods or food is as bad as it’s perceived to be that it’s actually can be really flavorful,” Racadio said.

Nika’s Mad Sweets pop-up can be found at the Whimsy Market on the Miracle Mile or at the Vegan Soulstice.

• Cast Iron Trading Co., which is offering a strawberry arugula salad and a vegan chimichurri dog as part of their vegan menu items.

• YC Catering, which specializes in Island Fusion Cuisine from the Islands of Guam, Puerto Rico, and Caribbean Island, with Mexican influences.

Stockton is one of nine Vegan Chef Challenges planned for the year, and one of three challenges in California. The other two challenges will take place in Chula Vista in August and in Sacramento in October.

Record reporter Angelaydet Rocha covers community news in Stockton and San Joaquin County. She can be reached at [email protected] or on Twitter @AngelaydetRocha. Support local news, subscribe to The Stockton Record at recordnet.com/subscribenow.