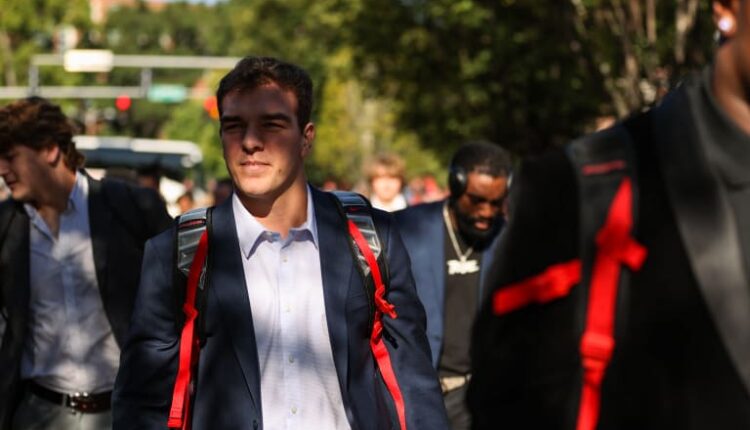 Gunner Stockton received praise from Kirby Smart and fans alike when it was revealed the freshman quarterback volunteered to be a live target in playoff practices. This allowed Georgia’s defense to get a better idea of ​​what it would be like to go against TCU’s Max Duggan.

It’s risky for a quarterback to take of the black jersey that designates him as a player not to be hit.

For those surprised that Georgia’s scout team quarterback would risk life and limb—don’t be. In the case of Stockton, the apple doesn’t fall far from the tree when it comes to accepting a little contact.

Stockton’s father Rob was an All-Southern Conference safety at Georgia Southern and is currently a member of the Eagles’ athletic hall of fame. Hitting was his specialty, so hearing that Gunner does not mind a little contact should not come as a huge shock.

“I used to go to the games at Georgia Southern all the time; all his old buddies were there, and they would talk about every time they got someone hemmed up, you had to watch out, because my dad would hit anybody,” laughed Stockton, who said he grew up a big Georgia Southern fan.

Stockton’s decision to ditch the black jersey was not the only praise he’s received from Smart. The younger Stockton served as the Bulldogs’ scout team quarterback throughout the course of the year, emulating everyone from Bo Nix to Hendon Hooker, to CJ Stroud to Duggan.

Father Rob Stockton joked that he had not heard about his son’s bold move.

“In true Gunner fashion, me and Sherrie (his wife) found out about him taking off the black jersey when Kirby made his statement about it after the National Championship game. It didn’t surprise me or her,” Rob Stockton said. “He’s been chomping at the bit to play more than two-hand touch. He demands and expects perfection, and he absolutely can’t stand when things aren’t perfect. I know he wanted to give the defense the best look, and I ‘m sure he figured that was the best way. He told me and Sherrie that he had a blast getting to run the scout team for TCU.”

While it was his job to give Georgia’s defense the best look he could every week, it was also a tremendous opportunity for him to learn and improve his own individual skills.

Apparently, that’s exactly what happened. And come spring, Stockton will get to show how much improvement he has made as he competes with Carson Beck and Brock Vandagriff to see who replaces Stetson Bennett as the Bulldogs’ starting quarterback.

“Just being able to go against the No. 1 defense in the country—I feel like it’s helped a lot,” Stockton said.

“Gunner’s incredible,” safety Dan Jackson said last September. “He exposes us every day on defence. He can sling it and he can expose us with his feet. I think he gives one of the greatest looks I’ve seen on the scout team.”

“I’ve really enjoyed it,” Stockton said of his time on the scout team. “I just feel like it’s all part of it, and I feel everybody has to go through it.”

Getting to watch Bennett go about his business, and his work ethic, also made quite an impression.

“It’s pretty neat getting to see how much control Stetson has with it, and I enjoy getting to learn everything,” Stockton said. “I feel like I fit in good with the scheme. I like what (Bennett) is doing, and it’s obviously working.”

Journalists Follow Up on Radon Mine Health Spas, Open Enrollment, and Health Fraud