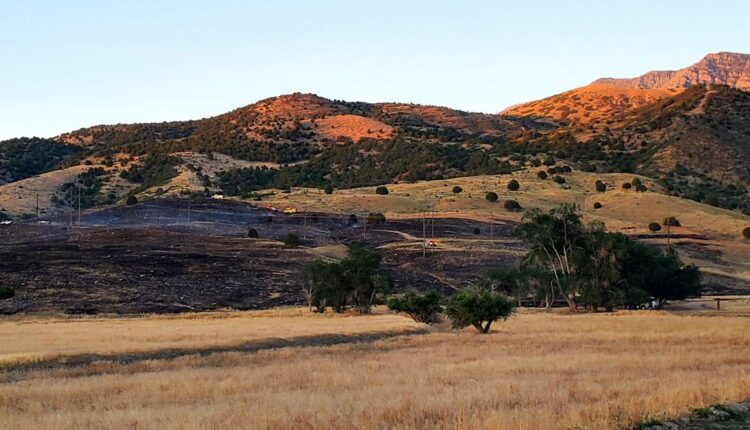 The Precision Fire was one of several active fires in Utah on Sunday.

(Utah Wildfire Info) The Precision Fire, which has burned 76 acres south of Santaquin as of Sunday afternoon, was expected to be fully contained by Sunday evening.

A wildfire that shut down a lane of Interstate 15 between Juab and Utah counties on Saturday was expected to be fully contained by Sunday evening.

The Precision Fire was discovered south of Santaquin just before 5:30 pm on Saturday and grew from 36 to 76 acres overnight. But Utah wildfire officials said the fire had been 80 percent contained by about 2 pm on Sunday and crews were “confident” the fire would be contained by the evening.

Officials suspect the fire was human-caused, though it remains under investigation.

• Jacob City Fire: The fire about a mile east of Stockton started July 9 and had burned about 4,185 acres as of Sunday, when it was considered 82% contained.

Helicopters on Sunday began flying wildfire crews that had been camped out on the fire line out of the area, as part of a demobilization process. The blaze first ignited after a generator caught fire, authorities have said. Stockton police on Tuesday arrested a man accused of negligence in connection with the blaze.

• Halfway Hill Fire: The fire south of Fillmore first detected July 8 had burned about 11,733 acres as of Sunday, when it was considered 33% contained.

The blaze forced evacuations near Fillmore earlier this month. Four people were arrested and accused of starting the wildfire. According to a probable cause statement, the four started a fire at a campsite — which investigators determined what where the wildfire began — then “left abruptly.”

When the campers were contacted by investigators, they said they had attempted to extinguish the fire before they left the area. They told police that after seeing the fire erupt and spread rapidly, “they were concerned that their fire may have been the cause.” But they did not contact any fire or police personnel to report it, police said.

More than 500 personnel responded to the wildfire. Expected containment as of Sunday was estimated by July 24.