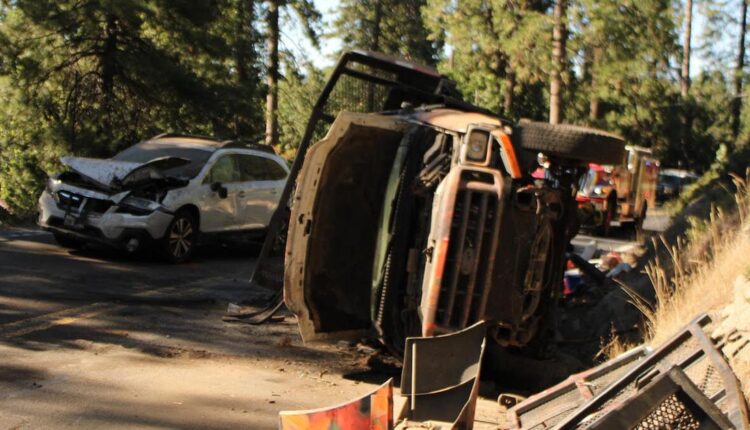 A man in a stolen pickup led the California Highway Patrol on a high-speed chase Saturday morning that resulted in a head-on crash and multi-car pileup that required two people in their 80s to be flown by helicopter to Modesto hospitals.

The chase began about 8 am Saturday when a Sonora-area CHP officer based in Jamestown learned from dispatch in Merced that a recently-stolen Ford F-350 pickup truck was seen going west on Highway 108 near Long Barn, a CHP spokesman said Monday.

The officer, who was near Long Barn at the time, spotted the stolen truck and got directly behind it before he activated his emergency lights, the CHP said.

The driver in the stolen pickup, identified by CHP as Joshua Micha Kohl, 49, of La Mesa in San Diego County, immediately accelerated and drove across double yellow lines to pass another vehicle in front of him, the CHP said.

Kohl went over the double yellow lines again to pass another vehicle in front of him in a leftward curve just east of Coffill Road in the Confidence area when he crashed head-on into an eastbound 2004 Chevrolet Silverado driven by Leroy Keller, 86, of Sonora , with his wife, Earlene Keller, 80, as his passenger, the CHP said.

The right side of the stolen pickup then struck a 2016 Chevrolet Sonic, driven by Diana Barreno, 59, of Twain Harte, and then struck an embankment and a 2018 Subaru Outback driven by Charles Hester, 59, of San Mateo.

Kohl was arrested and treated for minor injuries. No one else was injured in the multi-vehicle crash.

Kohl was taken to the Dambacher Detention Center in Sonora, where he was booked on suspicion of vehicle theft, possessing a stolen vehicle, assault with a deadly weapon, and passing over a divided highway and causing injuries, all felonies, the CHP said.

Drugs and alcohol were not suspected to be factors in the incident, the CHP said.

Underwood called The Union Democrat on Monday. She said she learned of the chase and the crash shortly after it happened.

“My brother called me about 10 minutes before 9 am Saturday to tell me my parents had been in a wreck, and they were being mediflighted to Modesto,” Underwood said. “My dad’s in surgery right now. They’ve released my mom and she’s OK and she’s still at Modesto, waiting for my dad’s surgery.”

Underwood wept as she spoke about her parents and their injuries.

“They were hit head-on,” Underwood said between sobs. “They were the first vehicle to be struck. I’m sorry, I’m just anxious about my dad in surgery. I’m at home right now.”

Underwood said her parents are residents of Phoenix Lake Road.

Law enforcement incident logs show a CHP request for at least one ambulance and multiple deputies to respond Code 3 — with lights and sirens — to Highway 108 and Coffill Road at 8:17 am Saturday.

Custody records from the Sheriff’s Office identified Kohl as a Sonora transient.