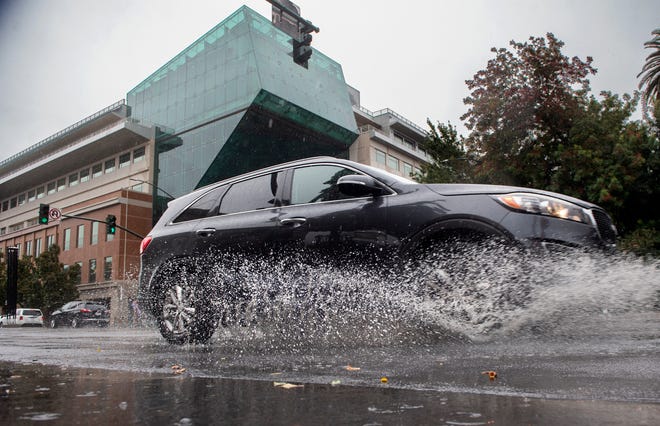 The first winter storm of the season brought rain to Stockton on Tuesday, soaking the city as a cold front moves through California.

More rain showers are forecast for Tuesday night into Wednesday, along with unusually cold temperatures and gusty winds. Some areas within Stockton were briefly without power Tuesday, according to Pacific Gas and Electric Co.

With the calendar still saying autumn, winter storm warnings went into effect in much of the Sierra Nevada and forecasters advised against mountain travel due to expected deteriorating conditions.

“Travel could be very difficult to impossible,” the National Weather Service said.

The California Highway Patrol office at Truckee, in the Sierra north of Lake Tahoe, said drivers should expect chain controls and delays due to the first significant snow of the season.

Ebbetts, Sonora and Monitor passes were closed in anticipation of the storm, the California Department of Transportation said. Tioga Road through Yosemite National Park also was closed.

The weather service said the heaviest precipitation was expected in Northern California, where slushy snow and gusty winds could impact travel on parts of Interstate 5.

“While much needed, this precipitation will not make much of a dent in the extreme to exceptional drought that continues to plague much of California,” forecasters wrote.

Sacramento’s Measure L explained: Here’s what you should know about the proposed youth fund

Opinion | A Message from Fresno: No One Should Be ‘Living Just to Die’