With 3-0 victory over Stockton, Wolves one win away from AHL Finals 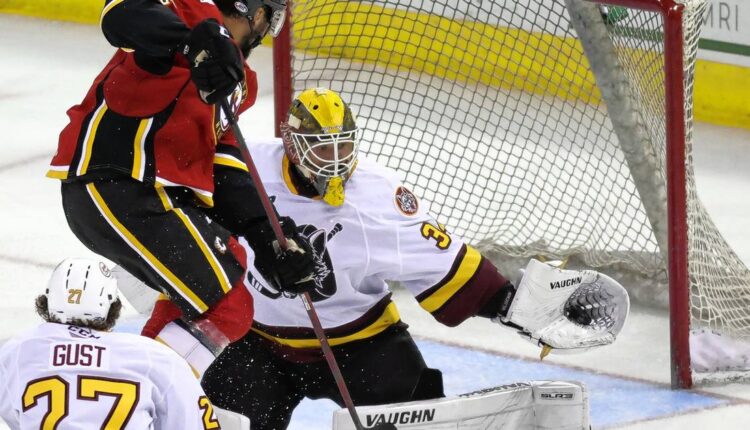 STOCKTON, California — Alex Lyon rejected all 23 shots he faced to backstop the Chicago Wolves to a 3-0 victory Wednesday night at Stockton Arena in Game 3 of the Western Conference Finals.

Forwards Richard Panik, Ivan Lodnia and Stefan Noesen scored for the Wolves (9-1), who get their chance to sweep the best-of-7 series at 9 pm Friday. If they win Game 4, then they’ll advance to the eighth league championship final in the organization’s 28-year history.

Lyon stood tall early as Stockton (6-4) came out strong on its home ice, but the Wolves collectively grew stronger as the game wore on.

Panic delivered the game’s first goal with 46 seconds left in the second period. Captain Andrew Poturalski and Noesen led a voracious forecheck and Poturalski swiped the puck behind Stockton’s net. As the battle continued, Noesen raced to the bottom of the left circle, collected the puck and sent a touch pass to Panik at the faceoff dot. Panic ripped a one-timer that went bar-down.

The Wolves created the momentum for that goal two minutes earlier with a crucial 5-on-3 penalty kill. Defenseman Jalen Chatfield and center Spencer Smallman were among the Wolves who sold out to block shots on the kill.

Lodnia delivered a valuable insurance goal at 5:45 of the third. On the backcheck, Lodnia swiped the puck from a Stockton forward at the blue line, carried it into the offensive zone and dished to Noel Gunler along the right half-wall. Gunler flicked a backhand pass to the high slot for Vasili Ponomarev, who spied Lodnia staring at an empty net from the bottom of the left circle. Lodnia swatted the pass home for his second goal of the postseason and a 2-0 lead.

Stockton pulled goaltender Dustin Wolf with more than three minutes left in an effort to erase the Wolves’ two-goal lead, but Noesen took advantage of the empty net. While sliding on his belly, Noesen fended off a defender and steered home a goal with 32 seconds to go.

Lyon (8-1) delivered his first postseason shutout after resting in Monday’s Game 2. Wolf (6-4) finished with 27 saves for the Heat.

The Wolves stay in Stockton for Game 4 at 9 pm Friday and Game 5, if necessary, at 8 pm Saturday. If the series requires more than five games, then the Wolves host Game 6 Tuesday, June 14, and Game 7 Wednesday, June 15