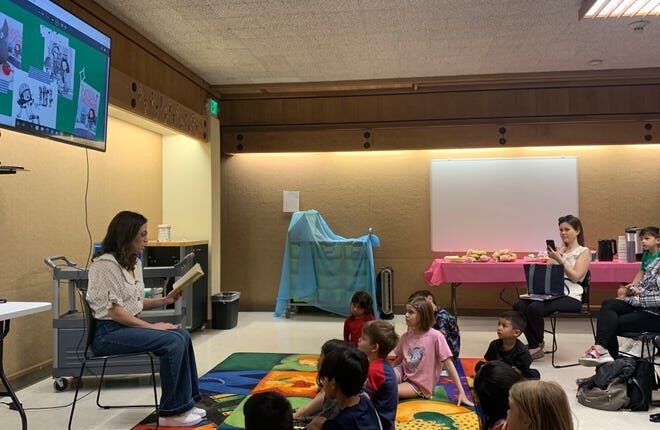 “Stef Taco, Taco Queen,” “Catalina Incognito” and the newest “Lola Out Loud” are just some of the books written by children’s author Jennifer Torres.

“I think most of my books explore the courage that doesn’t always look the way you expect courage and bravery to look,” said Torres, a former reporter at The Stockton Record. “So often my characters have to do brave things and have to step out of what feels comfortable and familiar.”

Earlier this month, Torres paid a visit to the Margaret K. Troke Branch Library, the same library that was part of the inspiration for one of her books. Torres had a meet and greet, a story time and answered the curious questions of a young crowd.

Andrea Fedorko took her granddaughters Alyssa, 10, and Peyton, 8, to the meet and greet event.

“I thought this was wonderful,” Fedorko said.

Fedorko said this is the first time she has taken her granddaughters to a library event like this one.

Torres read the first chapter of her book “Catalina Incognito” to the crowd. A book that was inspired by the same library she was visiting. The book also explores creativity, inspired by both of Torres’ grandmothers.

“It’s dedicated to my Nana, Josephine, who’s (a) very creative person … I think having someone in my life early on who made it exciting to create really nurtured that instinct to write and create in me, and so, I really am grateful for that gift,” Torres said.

But the book was also inspired by her grandmother, Mary, who taught her how to sew, Torres said.

“I just remember thinking, ‘That’s magical.’ The way she can take all these pieces and then turn them into something new with just a needle and thread,” Torres said. “And so that stayed with me and that was sort of what inspired the book: was like what if it really was magic and so that was the idea behind it.”

Torres recently published her 10th book “Lola Out Loud” based on the story of Central Valley’s Dolores Huerta.

“I always just thought it was really inspiring to live in a place where she grew up,” Torres said. “One of the thing(s) that really struck me was how she said she learned activism at home and learned about how important it is to care for your community and to be involved in a community’s life at home and so that just got me thinking about what that might have looked like what were some of those early lessons that really started here in Stockton.”

The library event was an event presented by Friends of the Library. It was the last event planned in celebration of Mexican Heritage month in October and the first author visit post COVID-19. This was also Torres’ first time visiting the library as a guest author.

“I thought she would inspire a lot of children to not only want to read her books, but to become writers themselves,” said Kari Leos, a trainee at Margaret K. Troke Branch Library.

Torres, a former record reporter said inspiration for her books comes from personal experiences and just basically from everywhere. She said she still carried a notebook.

“My second novel was called ‘Flor and Miranda Steal The Show,’ and that was enormously inspired by the Central Valley and about all of the agricultural life here,” she said.

From a reporter at The Record to a children’s author, Torres said she just wanted to write and use her imagination to tell stories.

“I love my time as a reporter. I think it was the best and most fun job. And I loved being a reporter in the Stockton community … but like I said, when you’re a reporter, you’re writing about real things that really happened to real people,” she said. “And there were other kinds of stories and other truths I wanted to get out that I needed different tools for that I needed to tell new stories with and so that’s why I moved into writing for young readers.”

Torres’ books can be found in popular bookstores such as Barnes & Noble, Vroman’s, Indiebound and Amazon.