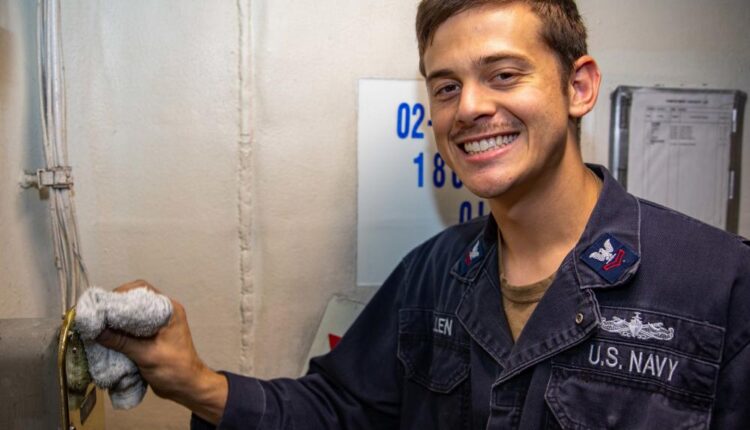 PHILIPPINE SEA –
A Sacramento, California, native and 2016 El Camino High School graduate is serving in the US Navy aboard the Ticonderoga-class guided-missile cruiser USS Chancellorsville (CG 62).
Petty Officer 2nd Class William Allen is an Operations Specialist, or OS, serving aboard Chancellorsville, forward-deployed to Commander, Fleet Activities Yokosuka, Japan.
Operations Specialists (OS) advise on shipboard warfare operations and navigation; maintain Combat Information Center (CIC)/Combat Direction Center (CDC) displays and provide strategic plotting for warfare areas, weapons control and navigation; operate surveillance radars, identification equipment, communications equipment, and associated command and control equipment; interpret and evaluate radar presentations and tactical situations and make recommendations to senior leadership; apply current procedures and doctrine to CIC/CDC operations as specified by Joint/Allied/US Navy publications and instructions; and display and disseminate tactical information during Surface Warfare (SUW), Integrated Air and Missile Defense (IAMD), Undersea Warfare (USW), Amphibious Warfare (AMW), Mine Warfare (MIW), Littoral Warfare (LW), Naval Surface Fire Support (NSFS), and Search and Rescue (SAR) operations.
“I enjoy participating in scenarios and knowing the schedule before everyone else,” Allen said. “I really enjoy being on Chancellorsville because I get to live in Japan, and being on a small boy we get to know everyone on-board.”
Allen’s current watch station onboard Chancellorsville is Tactical Data Coordinator (TDC). TDC’s coordinate and operate data link systems, internal and external communications equipment, and plot and report contact information. They interpret and evaluate geographical, strategic and summary plots and procedures to make recommendations to supervisors during watch conditions.
“I have been here a while now and just go with the flow of everything,” said Allen. “I have learned a lot about the Navy here as this is my first command.”
While on deployment, Chancellorsville has contributed to various critical missions in support of regional peace and prosperity. Most recently, Chancellorsville transited the South China Sea to conduct routine operations, upholding the rights, freedoms and lawful uses of the sea recognized in international law.
Allen is not done yet. One of his professional goals is to make Petty Officer First Class at his next command. First Classes have a great possibility of becoming a Leading Petty Officer (LPO). LPO is the go-to person to lead a division and help with administrative tasks.
“I am looking forward to what the future holds,” said Allen. “But, I still do my best to take it one day at a time. Focusing on the task at hand and being in the moment is important.”
Chancellorsville also worked as part of the Ronald Reagan Carrier Strike Group and operated in the South China Sea, East China Sea and Philippine Sea.
Chancellorsville is forward-deployed to the US 7th Fleet in support of security and stability in the Indo-Pacific and is assigned to Commander, Task Force 70, a combat-ready force that protects and defends the collective maritime interest of its allies and partners in the area.

this work, Sacramento, California, Native serves aboard USS Chancellorsville while conducting operations in the Philippine Seaby PO2 Justin Stackidentified by DVIDSmust comply with the restrictions shown on https://www.dvidshub.net/about/copyright.