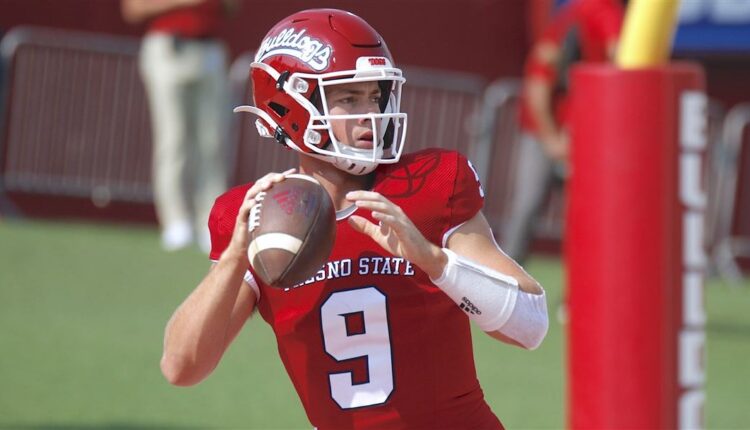 The annual Phil Steele preseason All-American and all-conference teams were revealed this week. The national college football pundit viewed the Fresno State Bulldogs and Jake Haener in high regard for his 2022 season preview.

Haener comes off a 4,096-yard season with 33 touchdowns and 9 interceptions in 2021. He completed 329-of-490 pass attempts for a 67 percent clip. Haener also ran for three more scores. He led the ‘Dogs to a 10-3 season and received national attention for his performance in a 40-37 win at No. 13UCLA. Now returns for a super senior year of eligibility due to the 2020 COVID-19 eligibility waiver.

Fresno State has not had a preseason All-American in the publication since safety Derron Smith in 2014. Davante Adams was also selected in 2013 by Steele. Haener was one of just 10 players outside of the Power-5 conferences to be recognized as an All-American by Steele this year. See Phil Steele’s full All-American team HERE.

Fresno State was also valued highly by Steele in the All-Mountain West teams. The Bulldogs led all teams in the conference with 15 selections. He also ranked the conference’s top position units – Fresno State ranked as his best at quarterback, wide receiver and defensive back units. The offensive line, running back and linebacker units also received Top 3 honors. Steele picked the Bulldogs to win the West Division and Boise State to win the Mountain Division.

Behind Fresno State in Steele’s 15 picks was Boise State with 14, followed by Colorado State, San Diego State and Utah State all with 13. San Jose State also had 12. No other conference teams had more than nine. The preseason picks and honors for Fresno State are the most by Steele since the 2018 preseason when he selected 16 Bulldogs to the preseason all-conference team.