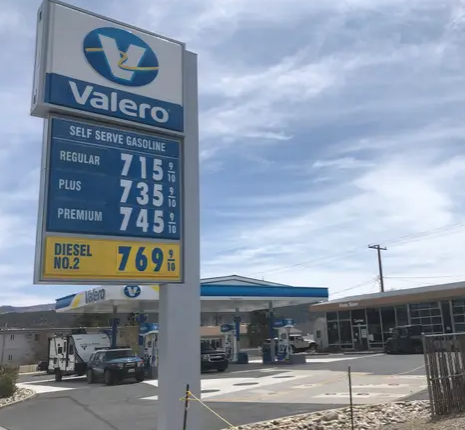 Want to see the future?

Fill up at a Sinclair or Costco while you still can for less than $6 a gallon.

Next take out a line of credit on your house.

Make sure you pack your smelling salts.

When you reach the junction of Highway 395, turn left.

It’s 115 miles from Manteca as the drone flies.

Pass up the Mobil and Shell stations if you dare.

The gas on Sunday was $7.64 a gallon at both stations.

That’s a bargain compared to the Chevron where the lowest price unleaded on Sunday would set you back $7.79 a gallon.

People I texted the photos to were shocked.

Drive 25 miles south to Bridgeport and it doesn’t get much better.

The Shell station there on Sunday was $7.65 a gallon. A bargain compared to Valero at $7.69 a gallon.

It’s the Shell station at the June Lake turnoff on Highway 395 south of Lee Vining.

I had friends back in 1973 that spent less than $8 to fill a VW Beetle gas tank.

Gas was 65 cents a gallon back then.

In case anyone cares we are paying 72.2 cents on every gallon we pump in California for gas taxes.

You are paying 49.5 cents extra when you send $6 on a gallon of gas in Manteca.

That’s based on an 8.25 cent per dollar sales tax.

It is lower in Manteca than Lathrop, Tracy, or Stockton.

Every 12-gallon fill up at $6 per gallon between sales tax and gas tax you are forking over $9.57 on taxes on an overall fill up costing $72.

That means every gallon of gas you buy in Manteca is costing you $1.22 in taxes.

To give that a bit of perspective, during the Arab oil embargo gas in California hit a then unheard of $1.35 a gallon.

As luck would have it, I spend a week each July in June Lake. I use it as a base for day hikes in the eastern Sierra in both Mono and Inyo counties.

I am careful to fill up before I leave Manteca.

During the course of a week between travel to trailheads and heading back home I will purchase a minimum of 20 gallons of gasoline in Mono County.

Some locals I know are bracing for it to hit $8.50 this summer.

But it’ll be nothing in comparison to what I will have to fork over during my annual late fall trip to Death Valley.

Gas in Furnace Creek was going for $8.84 a gallon on Sunday for the lowest priced unleaded.

There’s a good chance I’ll be forking over $10 a gallon come November.

You really don’t complain about gas prices in Death Valley.

You are happy when they have it.

The distances in the national park to reach hiking locations means I typically have to buy at least 25 gallons during my stay at either Stovepipe Wells or Furnace Creek.

You and I might squawk about such prices, but we don’t have to vacation in Mono or Inyo counties.

It wouldn’t stop me — at least not yet — from going there.

Imagine, however, if you live and work there.

Then again it may not be too much of a stretch.

It is clear that $7 a gallon of gasoline is within the realm of possibilities given we are just at the start of the summer driving season.

If you commute five days a week from Manteca to San Jose, you’re driving 150 miles per round trip.

It wasn’t too long before one could rent a decent apartment for that amount of money in Manteca.

A studio apartment today buys you back $1,950 at Atherton Arms.

Yet Sacramento does nothing.

It’s not like we have political deadlock in the River City.

The party in control doesn’t need a single vote from the minority party to get anything passed.

Yet there is no relief at the pump.

While a case can be made not to suspend the gas tax per se given it is per gallon, every time gas jumps $1 a gallon the state rakes in another 6.25 cents.

That means sales tax receipts at the pump have increased almost 50 percent as average gas prices have gone from the low $4 range to beyond $6 in California in the past 10 months.

At the very least the state could suspend collecting its share of the sales tax on anything beyond $5 a gallon given they have been awash in record surplus for three consecutive years.

Buy why do that?

More money means they can underwrite new government initiatives. Perhaps we can fund free veterinarian care for the pets of those in California illegally from other countries with the gas sales tax revenue pouring into Sacramento.

Besides, high gas prices play in the game plan of those that want to accelerate the push to electric vehicles and green energy to charge them.

Of course, given PG&E rates are already near the highest in the nation, placing even larger demands on the strained power generation and grid systems by going green will send the price of electricity soaring.

They also get $211 per day for expenses when the legislature is in session.

They are also getting 53 cents per mile driving on official business.

Remember the commuter getting 30 miles per gallon from Manteca to San Jose and back has a monthly gas bill of $750.

If they got what state legislators receive, they’d have $1,600 a month to pay for that gas bill as well as other expenses.

If anything, they benefit from it as it allows them to fund pet projects, dole out money to special interests, and further their green-ay-all-cost initiatives.

Keep that in when the gas pump price displays turn into a blur as gas keeps moving closer to $8 a gallon average in California.

This column is the opinion of editor, Dennis Wyatt, and does not necessarily represent the opinions of The Bulletin or 209 Multimedia. He can be reached at [email protected]