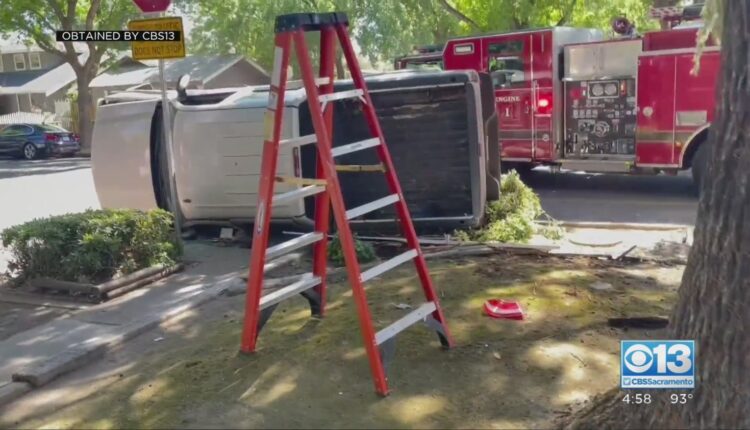 MODESTO (CBS13) — Good Samaritans rushed to a hit-and-run scene in Modesto over the weekend to find the engine still running and the driver who was hit calling for help.

At last check, a department spokesperson told CSB13 there have been no arrests. Investigators are still looking for the driver.

“It seems that this particular intersection right here is a magnet for bad driving,” said Nick Diamante, a neighbor who rushed to help upon hearing the wreck.

Neighbors say the intersection is known for erratic driving.

Shane Rivers unmistakably heard heavy metal scraping the pavement around 10:30 am that morning. He and his wife arrived first at the scene after the crash spilled into their yard.

“I could see the person in the driver’s seat saying, ‘I got a two-month-old in the car,’ Rivers said.

Stunning video shows a crowd of Good Samaritans working to get the baby out.

“It was just people scanning and assessing the risk and what they could do to make sure that everyone was safe,” Diamante said.

Investigators say all occupants were transported to a local hospital for their injuries. The infant was flown to the hospital out of an abundance of caution.

Rivers told CBS13 he’s seen multiple wrecks at the intersection. He is advocating for either a four-way stop or speed bumps.

It is unclear if this intersection is already on its radar.

“It’s a random corner here, but for some reason people tend to run this,” Rivers said.