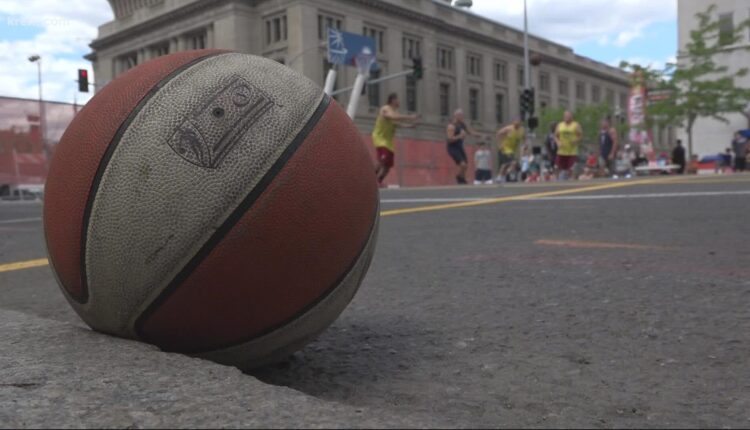 Despite the low numbers, Executive Director Riley Stockton is confident that Hoopfest will continue to grow for the foreseeable future

SPOKANE, Wash. — After a two-year hiatus, Hoopfest is returning.

“We want to be a bright spot in this community. We want people to be proud that they live where Hoopfest is because we are very proud to be in downtown Spokane,” Hoopfest Executive Director Riley Stockton said.

Stockton says that this year, there will be about 75 fewer courts because there are not as many teams registered. Hoopfest is used to hosting around 6,000 teams. The deadline to register is Tuesday, May 31 and, as of right now, only a little more than 3,200 teams have signed up.

“I think we will be back to that 6,000 team mark. It just might take a couple years,” Stockton said. “We will have enough people to make it feel full down here no matter what we end up with.”

Hoopfest was canceled two years in a row. The non-profit took a hit financially.

“It was definitely tough,” Stockton said. “We’re a non-profit with 5-6 employees and so it was tough, but our sponsors have been really great to us.”

Stockton says they lost some momentum.

“I think some people still have their reservations about large groups, which is fine,” Stockton said.

Hoopfest is still looking for more volunteers. Teams have until Tuesday, May 31 at midnight to register. Stockton says there is a chance the deadline could be extended. But, to play it safe, teams should sign up by then.

“I am 100% confident that, no matter what, we will still be the largest 3 on 3 tournament in the world and we will continue to grow for the foreseeable future,” Stockton said.

One major change this year is the center court location. It will be under the US Pavilion.