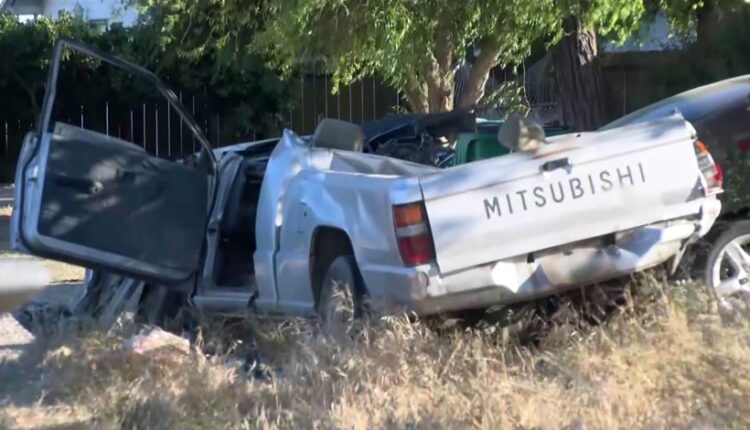 Sgt. Christopher Swanberg said the first of the crashes came in just before two o’clock on Monday afternoon in the Sanger area.

“There were some children involved, but it’s not sure if they were ejected,” Swanberg said.

He added that not everyone was wearing seatbelts. One person from the SUV had to be airlifted to the hospital, and at least four others were transported by ambulance.

A power pole was knocked down during a crash in Sanger. RELATED STORY | CHP and Fresno Police keeping close eyes on highways and roads this holiday weekend

“It’s very important on holidays like this to buckle up. Watch your speed, watch the stop signs; get home safe, arrive safe,” said Swanberg.

A few hours later across the county, officers said another wreck killed one person and sent four people to the hospital. This happened at the corner of South and Cherry Avenues in southern Fresno County.

Investigators said a truck and a sedan crashed, and the truck is at fault. The passenger died in the truck, and the driver as well as everyone in the sedan was transported to a hospital for treatment.

Officers are still investigating if drugs or alcohol were a factor.

CHP had all available officers out on the roads over Memorial Day Weekend.

Boating in Fresno Co. over the holiday weekend? What you need to know to avoid…