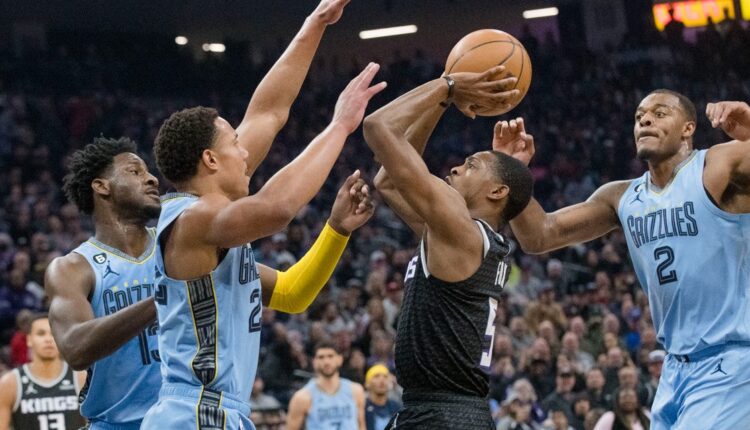 SACRAMENTO, Calif. — Trey Lyles scored a season-high 24 points, Harrison Barnes had 15 of his 20 in Sacramento’s record-tying first quarter and the Kings beat the short-handed Memphis Grizzlies 133-100 on Monday night.

The Kings tied the NBA record with 12 3-pointers in the first quarter — in just 13 attempts — and scored 47 points. But Sacramento didn’t put away the game until outscoring Memphis 33-10 in the fourth quarter.

Domantas Sabonis finished with 14 points, 11 assists and 10 rebounds for his sixth triple-double of the season. Sabonis leads the NBA in double-doubles with 36.

Keegan Murray also finished with 20 points and De’Aaron Fox had 17 points and 10 assists.

Desmond Bane scored 21 points for the Memphis (31-16), which played without Ja Morant and Steven Adams. The Grizzlies have lost three straight following an 11-game winning streak.

Grizzlies: Tyus Jones started in place of Morant and had 12 points, eight assists and six rebounds.

Kings: Sacramento was without C Chimezie Metu because of a left knee bone bruise. …the Kings committed a season-high 25 turnovers.

Grizzlies: Travel to face the Warriors on Wednesday.

Meet the Venture Academy Mustangs out of Stockton | interview

“I mean, I don’t think Stockton could score like me” – Jamal Murray’s response to coach’s comparison of Nuggets duo to Malone-Stockton – Basketball Network