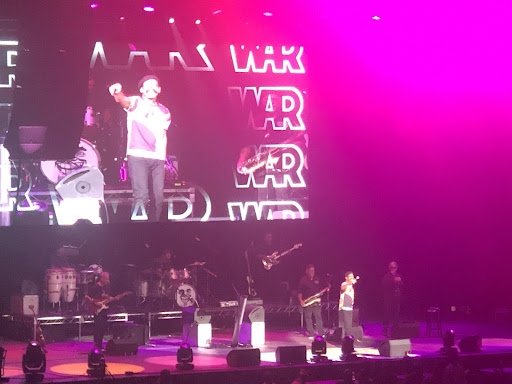 Timeless musicians performed at the “Latin Legends” concert hosted in the Save Mart Center (SMC) on June 17.

The concert featured bands symbolizing the definition of genre bending, with headlining band Was satisfying all types of music listeners.

War, who are Long Beach natives, celebrated its 50th anniversary at the SMC. The group brought its iconic sound to Fresno, infusing rock, soul, R&B, jazz, reggae and Latin pop to bring a diverse audience together with its music.

The Delfonics, a Philadelphia-based band, opened the concert with smooth soul and illuminated the SMC with wavy, purple lighting.

The band performed their 1972 hit “Hey! Love” that maintained its dream-like sound and “La La Means I Love You,” which brought the first big cheers from the crowd.

The Latin rock band Thee Midniters from Los Angeles followed, bringing swing inspired by the British Invasion along with reggae in songs like “Sad Girl.”

These bands showcased their experience and musicianship, highlighting the night with live instrumentation.

Malo, a band led by Richard Bean, Arcelio Garcia and Jorge Santana, stood out with his iconic guitar riffs and loud drums. It had concertgoers rocking out and invited Latinx audience members to dance with “Suavecito.”

The following groups like Tierra, Joe Bataan and The Intruders continued the energetic and lively sound.

Kid Frost combined his old-school delivery in raps with beats featuring a great production for fans of classic 1990s rap. His voice also was the closest to the sound he is remembered for, with a tone only artists like Rakim, Ice-T and Cypress Hill can pull off.

Lisa Lisa’s performance went on in true pop star fashion, including a segment where she invited young back up dancers to introduce a new element to the show.

The Puerto Rican vocalist from New York brought some of the loudest cheers from the crowd, with many who knew every word of her songs.

Martin put the crowd in awe with his saxophone and flute playing, while Ziff and Rodriguez didn’t miss a beat.

Jordan brought the band together with his powerful vocals, expert keyboard playing and comedic banter with the crowd.

Their hit songs “War,” “Lowrider” and “Slippin into Darkness” were the highlight of the night with various other songs encompassing a great one-hour set from the over 50-year-old group.