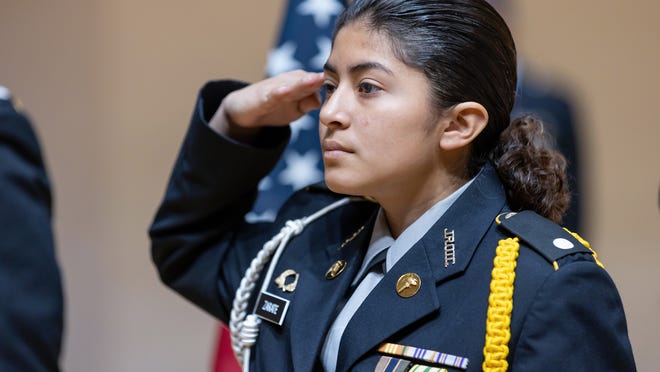 Some 80 Stocktonians gathered downtown at the Memorial Civic Auditorium May 30 to honor those that have fallen in the line of duty.

Veterans of Foreign Wars Luneta Post 52, American Legion Karl Ross Post 16, American Legion Ed Stewart Post 803 and the Stockton AMVETS honored those who have made the ultimate sacrifice with flags, wreaths, prayer, a playing of “Amazing Grace” from highland bagpiper dr Raphael Pazo and a three-volley salute outside the auditorium followed by taps on the bugle.

Stockton Vietnam veteran Rudy Gonzales shared stories about several Stocktonians he grew up with who fell in Vietnam. He asked those in attendance to stand and say the names of their friends or loved ones who died in American wars.

“I go to the Vietnam memorial across the street and I read the names on the wall and think about the sacrifices they made,” Gonzales said. “These servicemen and servicewomen did not die in vain … we have an obligation to live the lives they would have lived.”

Rep. Jerry McNerney, D-Stockton, who championed the new Veterans Affairs community-based outpatient clinic being built in French Camp, spoke at the tribute and thanked the veterans in attendance for their service. He told a quick story about his trip to McDonald’s in the morning that made him appreciate the freedoms of those who have fallen in American wars fought for.

“A gentlemen said, ‘Are you Congressman McNerney? Thank you for what you’ve done for our veterans, but I hate everything else you stood for,’” McNerney said to a few laughs from the crowd. “We have a country where people are able to express their feelings and accept what a democracy means and what it stands for. Today we honor the people that didn’t come back.”

County Supervisor Miguel Villapudua addressed the modest crowd and thanked all veterans here and gone for their sacrifices.

“Together we share what they fought for,” Villapudua said. “We have the freedoms they envisioned for us.”

Stockton Vice Mayor Christina Fugazi said Memorial Day is a summer day in her family. She said as a kid she would go to the cemetery in Lodi to clean the tombstones of fallen service members, pray and leave flowers. She read an excerpt from a letter she came across at the Stockton Masonic Lodge penned by former United States President Warren G. Harding in 1921.

“’This letter will be sealed from the sight of men at a time when the world is in the midst of the travail following a war which has been one of the greatest trials to which humanity has ever been subjected. I hope between the day when it shall be sealed and when it again sees the light of the world will have so far progressed spiritually and institutionally that war will be no more known among men,’” Fugazi recited. “He couldn’t have known the number of wars that would follow after World War I … god bless you all.”